Bonzo, a 12-year-old Pekingese dog suffers from hip dysplasia and neurological problems, he also survived a stroke that left him with mobility problems, but somehow with his age and health ailments, the dog manage to walk out to a balcony 11 stories high, fall off, and survive the 120 feet high drop.

Kimberly Bellinger, the dog’s owner, was visiting her mom in West Palm Beach and took her dog with her. She wasn’t concerned about leaving her dog in the balcony because Bonzo usually doesn’t walk much, but in his new surroundings the pet wanted to explore. Unfortunately, he accidentally walked off the balcony. 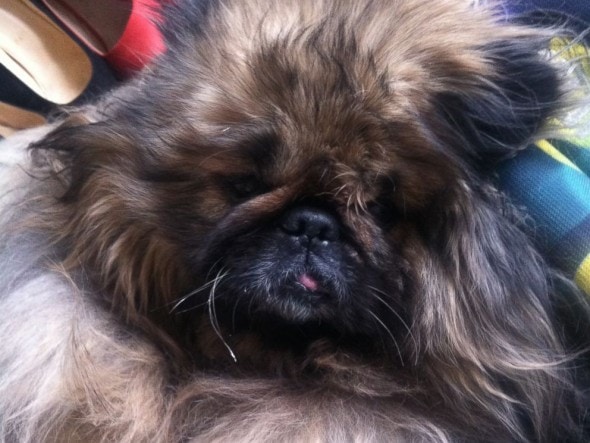 Bellinger says she heard her mom say that Bonzo was walking, so the pet owner went to check on her dog.

“I went out to the balcony and I didn’t see him there,” Bellinger told ABC News. “I looked over the edge of the balcony and I saw his little body laying there on the grass all the way down. I was completely hysterical. I thought he was dead.”

The worried owner rushed downstairs and was prepared to find her pet dead, but as she approached Bonzo, she realized the dog was alive.

The dog was rushed to Palm Beach Veterinary Specialists and after running tests, it was determined the dog only suffered from a broken rib. The pet was hospitalized for five days and was later released to go back home with his owner.

Bellinger and veterinarians are calling the dog a “miracle dog.” It is unlikely for any dog to survive such fall – let alone Bonzo who suffers from many ailments – but inexplicably and fortunately Bonzo survived.