When you think of Benjamin Moore the first thing that comes to mind is paint, but after you read this story maybe the next time you hear this brand you’ll think of a stray dog. In northern Manitoba, Canada, a stray dog was named Benjamin Moore after he was found covered in bright blue paint.

No one knows how the three-year-old shepherd-husky got covered in paint, the dog was not trying out for Blue Man Group or pretending to be a Smurf, but somehow when rescuers found him, his fur was blue instead of tan color. 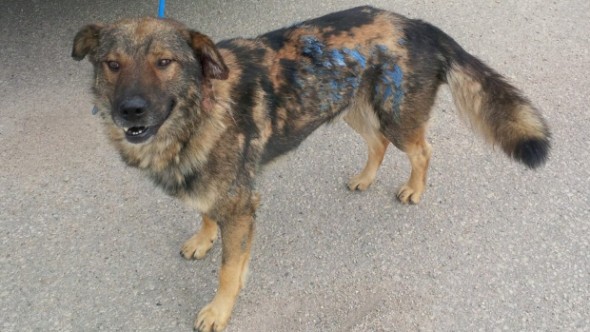 The Winnipeg Humane Society is currently caring for Benjamin Moore and Dr. Erika Anseeuw, the society’s director of animal health, said the paint was easy to remove.

Once cleaned, veterinarians discovered the painted dog had a bite wound on one of his ears. The wound was cleaned and is currently being treated.

Rescuers placed the dog under foster care and are evaluating him before making him available for adoption.

“Because he had the bite wound on his ear, [we’re] a little bit concerned maybe that he might have been bitten by another dog, so we’re evaluating him with other dogs,” Anseeuw told CBC News.

Once his temperament is tested and his health cleared, Benjamin will be ready to go to his forever home.