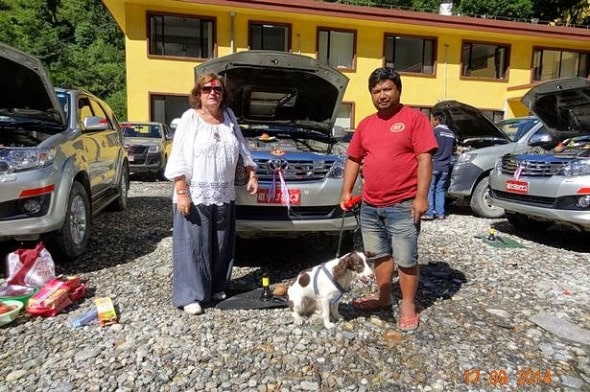 Karen Latchford and her boyfriend Chris Ashdown were away when the earthquake hit Nepal two weeks ago.  Their dog Tara was in a kennel, and they were devastated, thinking that she was most certainly dead.  But amazingly, she was found alive and is doing well.

Chris is a civil engineer and Karen is an English teacher.  They have lived in Nepal for the last year, and will soon be moving to Ethiopia for an irrigation project.  Dogs often have to stay in quarantine for a while when traveling to another country, so Tara was kept in Nepal while Chris and Karen went on a brief visit home in the UK.

Tara was staying at Paradise Boarding Kennels in Kathmandu when the 7.8 magnitude earthquake rocked the area.  Karen tried to get a hold of the kennel, but was predictably unable to get through.

She issued a mass appeal to the public to help find Tara and let her know that she was okay.

“I understand it’s a tragedy and lives have been lost and it may seem selfish but I just want to make sure she’s OK that’s all. She’s basically my family. I don’t have any children and she’s my baby.”

The couple has had Tara since they adopted the English Springer Spaniel as a puppy in Pakistan.

“Tara is friendly, she loves people. Just like her name she’s an absolute star. We were offered two puppies in Pakistan and she just ran up and leapt into Chris’ arms. She loves people, she loves playing. Full of energy, runs around, plays all the time,” Karen said.

“We’re just so worried and if there’s anyone out there who can help please let us know.

“I just hope maybe someone has seen her and will get in touch.  We’ve got numbers for the kennel but can’t get in touch with anybody. We’ve managed today to get two mobile numbers for managers but they are not connecting.”

Thankfully, a veterinarian visited the site of the kennel and found Tara alive. 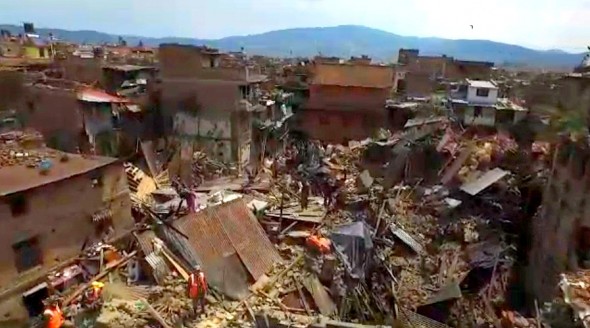 “We are just so, so relieved she is okay – it’s wonderful. The vet has checked her over and said she is in good health,” Karen said.

“Now a friend is going to check on her, too. The airport is open but there are a lot of people being flown out so we don’t know when we will be able to fly her back.

“Food is running low there so we do want to move as quickly as we can.”

They are working on getting a flight as soon as possible.

“We are just so relieved and now we want her back.  But at the same time we know there are a lot of dogs in Kathmandu not getting this attention and care and we are worried about those, as well.”

Karen is deeply concerned about all who have been affected by the catastrophe.

“I know from speaking to my friends in Nepal that aid is finally getting through and making it out to more remote areas.

“I just hope everyone we knew – all the students I taught and the teachers I worked with – are fit and well and that their families are, too.”