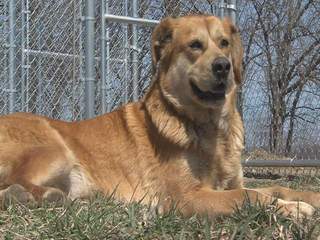 A good Samaritan has saved the life of a dog that was intentionally thrown in the river and left to drown.  Troy Jones is now being called a hero by the Parke Vermillion Humane Society in Indiana, and he certainly did a heroic thing by saving the life of the dog, who is now named Serendipity.

“I heard something whining down by the crick,” said Jones, “I looked over and saw a dog with his head, all was sticking up was part of his nose, mouth trying to get air.”  He added, “It wasn’t very nice, there were cinder blocks tied to the side of the dogs head, trying to drown it, and both of it’s legs were tied together.”  And the story gets worse; “He also found a letter with the dog and it stated that they wanted the animal to die,” said Dareth Stonebraker from the Parke-Vermillion Humane Shelter.

After rescuing her, Jones took her home and cleaned her up and then took her to the shelter, but even after he knew she was okay he was bothered, saying “I was very disturbed to see what I seen, I think it’s very cruel that someone could be like that.”  Serendipity knows how lucky she is and is very grateful so when Jones came back to the shelter to check on her she gave him a wonderful greeting.  “We all came in to visit. She was so grateful to see him again; licking him, wagging tail,” said Janine Ostrum from the shelter.

Amazingly, Serendipity is in good health and ready for adoption.  “For the things that she’s been through, she’s actually in pretty good shape,” said Stonebraker. “Her body temperature was normal. Physically, she doesn’t have any wounds. She’s very fortunate.”  No one knows who did this terrible thing to her, but an investigation is ongoing.  If you have information or wish to adopt Serendipity or another dog in need of a loving home contact the Parke Vermillion Humane Society.