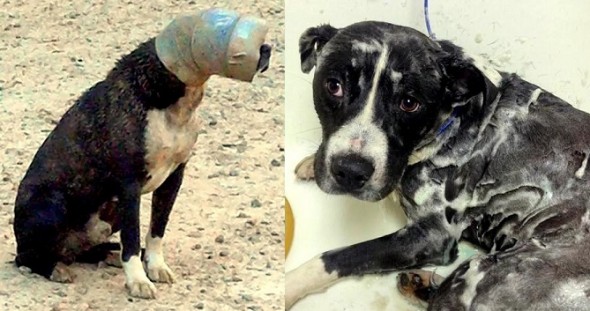 After spending over a week with his head stuck in a pipe, leaving him barely able to eat or drink, a South Carolina dog has finally been freed.  Dozens of volunteers tried fruitlessly to trap him, but he was too frightened to let anyone come near.  Now Piper has been taken in by animal control and will soon have a new home.

The feral dog had been seen roaming around a 500-acre stretch of federal forest land in the Westminster, South Carolina area for about a week.  The poor thing had gotten his head stuck in some ductwork, likely while trying to forage for food.

“There is a lot of rugged terrain that’s home to timber rattlers, wild boar and bears that we have to be mindful of, said UARF’s Kelly Blair.  “Now we also have to take into account the cold and the rain.”

A number of volunteers from Upstate Animal Rescue Foundation, local veterinary clinics, and animal control officers worked tirelessly for days to set traps.  Piper is terrified of people, and wouldn’t let anyone get close enough to tranquilize him. 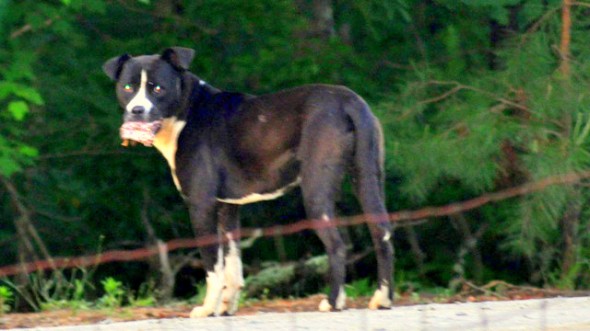 “He [a veterinarian]’s still certain that the metal is wound too tightly around Piper’s jaws for him to eat, but he’s fairly certain that Piper is able to drink water,” Blair said.  “So at least he’s still able to get some nourishment.”

On Sunday, the seventh day of Piper being ensnared, concern for him peaked.  He was barely able to sustain himself and wouldn’t last much longer.  But on Monday, Oconee County Animal Control officers went out and confirmed that Piper had finally freed himself from his quagmire.

He was given a steak, which he can be seen happily trotting off with in the photo.  Animal control took him in, and is in the process of neutering and vaccinating him.

Someone has already adopted him, and he will go to his new home once he has been released from veterinary care. 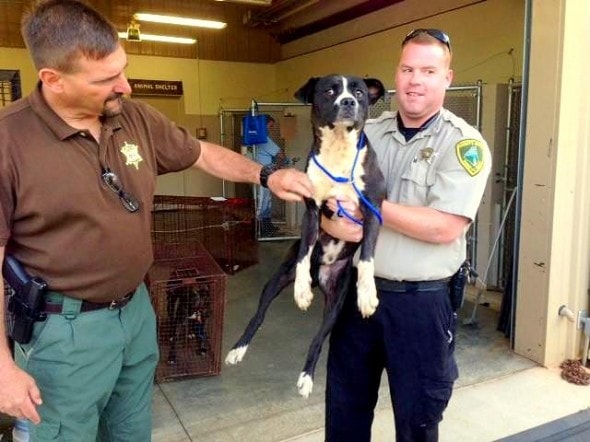