When volunteers from Secondhand Hounds met Coen at a Kansas, Mo., shelter on August 10, 2014, they couldn’t believe how badly injured this dog was. Knowing that if left behind the dog would get euthanized, the Minnetonka, Minn., animal rescue group decided to bring him back home, help him heal, and give him a second chance at life.

Coen, believed to be either an Australian Shepherd or Great Dane mix, was listed as a stray with no information on the kind of life he lived before arriving at the shelter. Based on his wounds – missing fur, irritated hide and thin body – rescuers knew this canine had been abused.

“The shelter suggested somebody had actually doused him in gasoline or acid,” Jane Mesna, a college student and temporary foster parent for Coen, told KARE. “We were heartbroken and he was just laying there, kind of licking his wounds and everything like that, but he just absolutely stole our hearts.”

With the help of a generous donor, Coen and other rescued animals made the trip back to Minnesota. There, he is receiving medical care and getting ready for adoption.

The cause of the dog’s hair loss is unknown. Veterinarians are not sure if he suffers from an auto-immune disorder, but they hope the various tests performed, will help them determine the cause of Coen’s illness. 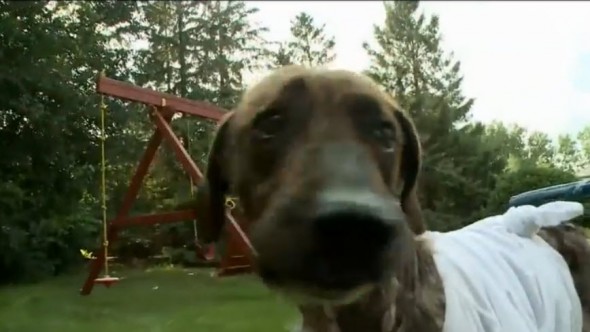 In order to pay for the rescue dog’s medical treatments, Secondhand Hounds started an online fundraising. The hopes to raise $3,000 in 50 days, but the organization was dumbfounded when they reached their goal in just a few hours.

“We were all just completely blown away at the generosity that some people have towards these animals they don’t even know that well,” said Mesna.

The formerly abused dog still has a long way to go. He is 20 pounds under weight and his body needs to heal from the burns, but the his great disposition makes him an ideal candidate to fully recover.

If you would like to donate towards Coen’s medical and rehabilitation cost visit his fundraising page. Funds left over from the dog’s care will be transferred to the Secondhand Hounds Fighter Fund, a program geared toward saving dogs with special medical needs.