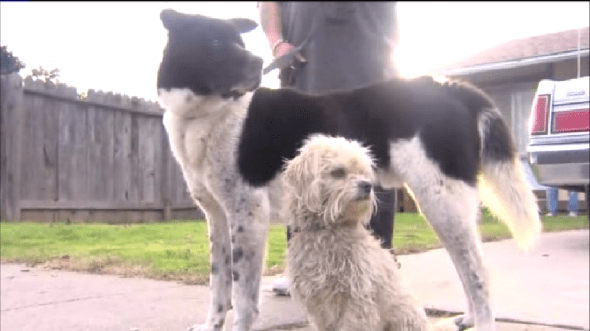 When an Akita RJ found himself stuck in a drainage canal his best friend and brother Tommy came to his rescue.

Frank Chargualaf went to bring his dogs in for the night when he noticed Tommy acting strange. “My little dog kept running back and forth in the middle of the yard like he was trying to show me something,” said Chargualaf. Tommy was obviously frantic and distressed. Chargualaf followed Tommy to find his other dog RJ down in the drainage canal and unable to get out. “It looked like he tried to climb out and the inclines are so steep,” said Chargualaf.

RJ had escaped through a hole in a fence and it is believed he was curiously going after a skunk when he ended up in the drainage canal. Chargualaf just recently moved into their home and was unaware of any hole in the fence. Unable to get RJ out himself Chargualaf called for help. Sacramento Metro Fire Department arrived on the scene to help rescue RJ. Unable to pull RJ up from the canal firefighters had to unlock a gate that only they had the key for. Then they were able to walk RJ out.

The firefighters were happy to help the dog in need. “This is one of those incidents that isn’t very high-stress,” said Captain Jason Wenner. “We’re all dog lovers.” The firefighters went above and beyond just rescuing RJ though. They came back to Chargualaf’s house to help fix the hole in fence so RJ wouldn’t be able to escape again.