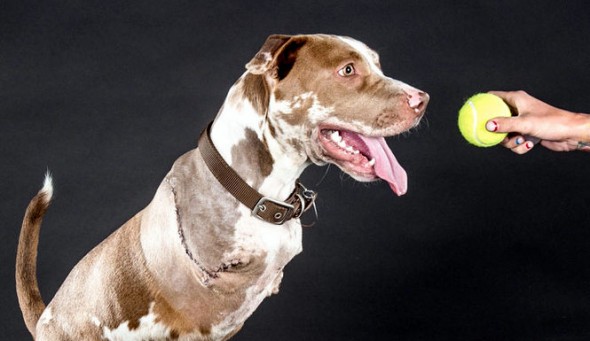 London the pit bull suffered such horrible neglect and abuse that when he was dropped off at a humane society his front legs were so severely fractured they had to be amputated. Now London will get his day in court when his former owners go to trial on charges of animal cruelty, neglect and torture.

London was dropped off at a humane society in Crescent City, California this past summer when he was only around six months old. His legs were shattered. It was first believed that he had fallen out a window, but witnesses revealed that his previous owners had thrown him to the floor for chewing on their couch.

The Humane Society was unable to care for London’s severe injuries and reached out to Panda Paws which cares for special needs dogs. The rescue agreed to take him and he was transported to Vancouver, Washington where he was brought under the care of Dr. Brandon Sherman. The damage to his legs was so severe that Dr. Brandon Sherman determined that amputating his front legs was the best option for London. London has made an amazing recovery since his surgery and gets around with the help of a specially made wheelchair. He has also found a new loving home and is thriving in his new life.

Police investigation into London’s case led to the arrest of his previous owners, Zachary Hinton and Sarah Anderson. They are charged with animal cruelty, neglect and torture and are facing three years in prison and a fine of up to $20,000 for their inhumane treatment of London.

Dr. Brandon Sherman, the vet who performed surgery on London, and Amanda Giese, who cared for him after surgery, will testify in the trial against Hinton and Anderson. London will appear alongside them. Originally they were scheduled to appear this week but a clerical error has delayed the trial until February.

To keep up to date on London’s trial and progress visit the Panda Paws Rescue Facebook page.