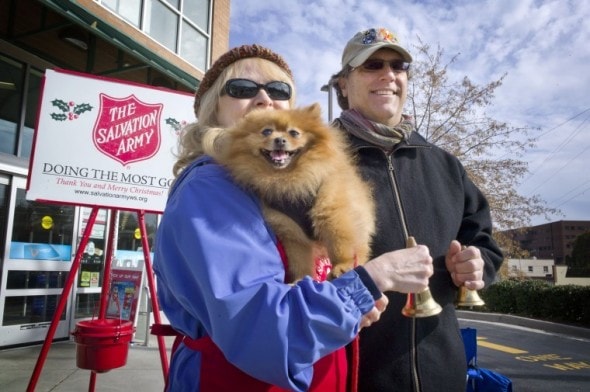 One of the signature signs that the Christmas holiday season has arrived is the appearance of volunteers ringing bells next to large red kettles. The Salvation Army’s Red Kettle drive helps raise money for  needy families, seniors and the homeless. One four-legged volunteer is helping bring in donations to a red kettle in Winston-Salem, North Carolina.

Tango, a 7-year-old Pomeranian, is a huge draw outside a Walgreens in Winston-Salem where he accompanies his owner Sandy Cruise and her fiancée Eric Scheipers as they ring bells for the Salvation Army. “He’s a big draw,” Scheipers said. People love to stop and pet Tango “He puts a smile on their faces when they see him,” said Cruise. Tango helps encourage donations as people stop to pet and meet the cute and friendly dog.

The money Tango is helping to raise is going to a good cause. The Red Kettle campaign helps the Salvation Army as they aid tens of thousands of people with rent and utility assistance, food and shelter. For two years the couple and Tango have been ringing bells to help raise money during the holiday season. Every Tuesday since November 11th they’ve been stationed outside the Walgreens. Starting on December 4th they’ll move to the Harris Teeter grocery store nearby.