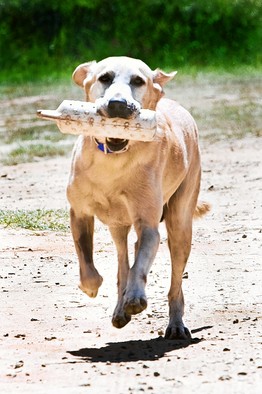 Human war heroes are not the only ones suffering from Post Traumatic Stress Disorder. Gunner is a military dog that served with the Marines. He is also suffering from the emotional disorder. Unable to serve anymore, he has found a home with the Dunhams, who lost their own Marine son in 2004. When Deb Dunham heard of Gunner’s plight she stepped up to take him in, “My Marine never came home, I have a place for a Marine.”

Gunner was trained to sniff out explosive booby traps and was deployed with the Marines to Afghanistan last fall. Something, his trainer’s not sure what specifically, pushed Gunner over the edge. Gunner became skittish and was unable to be sent on patrols anymore. The Marines spent a year trying to retrain him but he could no longer work with the Marines and was declared “excess”.

According to the New York Times which spoke with Military Veterinarians, more than 5% of the dogs deployed by the American military will develop canine PTSD. Almost all military dogs will have some residual effects. Different dogs show different symptoms when it comes to PTSD, from becoming more aggressive or becoming clingy and timid. Mainly these dogs suffering from PTSD stop performing the tasks they were trained to do.

Deb Dunham heard of Gunner’s story and wanted to help. “He was declared excess, which really offended me because he’s not excess, he’s just disabled.” After filling out an adoption application, the Dunhams drove 16 hours to a kennel in South Caroline to pick up Gunner.

Gunner immediately was affectionate with his new owners, curling up next to Deb in the backseat on the ride back to their home in Scio, New York. His emotional scars are not gone though. One of the first days back in Scio a storm rolled through. Gunner was in the yard playing, and when the lighting started to flash he threw himself against the sliding door trying to get inside. Once inside, Gunner went into his kennel, the only place he felt safe. So the Dunhams moved his kennel into their bedroom for the night and their other lab Ziggy stood watch over him the rest of the night.

The next day, Deb who works as a home economics teacher, got permission to bring Gunner to work with her. He spent the day sleeping on a pillow next to her desk. Deb used the opportunity to educate her students about PTSD. The Dunhams are all too familiar with the effects of PTSD.

In 2004 their son, Cpl. Jason Dunham, had fought an insurgent hand-to-hand on a dusty road. When two other Marines came to help the Iraqi dropped a hand grenade. That’s when Jason covered the grenade with his helmet, shielding the other men. Shrapnel penetrated his brain sending him into a coma he’d never recover from. He was posthumously awarded the Medal of Honor for his heroism in 2007, the first Marine recipient since the Vietnam War. The soldiers he saved have visited with and formed a close bond with the Dunhams. Both men are struggling with the effects of their friend giving his life to save them and rely on the Dunhams when they are struggling. Now Gunner is also relying on them to help with his emotional wounds.

Gunner has started to make progress, but the Dunhams know not all his emotional scars will go away just like their scars regarding Jason won’t. “To us it’s like Jason died yesterday. To Gunner, whatever happened to him – it’s probably like that happened yesterday,” said Dan Dunham.