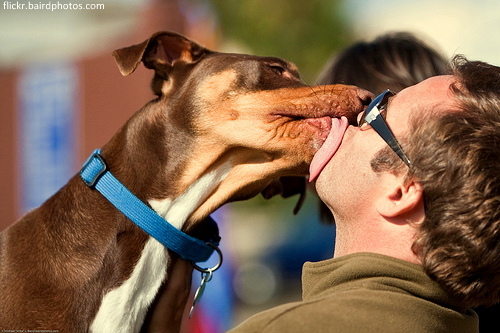 We know by now that the myth about dogs’ mouths being cleaner than ours isn’t true – after all, whose teeth are brushed more often?  But they aren’t as disgusting as you might think, either… at least, no worse than anyone else’s!

As kids we always heard that dogs have cleaner mouths because they have special germ-killing enzymes, or that wolves didn’t use toothbrushes, so dogs didn’t evolve with a need for them.  They chomp on ropes and sticks – nature’s toothbrushes.

But Dr. Julie Torruellas-Garcia, a microbiologist from Nova Southeastern University, says that’s not true.  Based on a study she conducted testing bacteria levels in dogs’ saliva, she says you may want to think twice about getting a lot of face love from your pup.

“There was quite a bit of bacteria that grew from the dogs’ mouths,” she said.

Saliva samples taken from dogs in West Palm Beach and Fort Lauderdale were loaded with microbes.

“One plate had so many bacteria mixed together that it was difficult to test,” said Dr. Torruellas-Garcia.

“Think about where a dog tends to lick, and consider he or she might have just licked before they licked you,” Dr. Torruellas-Garcia said.

However, no e. Coli or staph infection-causing bacteria was present.  Veterinarian Ken Simmons said we shouldn’t worry too much – the bacteria doesn’t stay in dogs’ mouths for long.

“It’s gone so fast, if they lick and groom themselves, whatever organisms they ingest, they’re gone in a matter of minutes,” he explained.

Ultimately the tests didn’t reveal anything unusual.  Dr. Simmons says it’s just a matter of what we’re comfortable with.  After all, studies show that there are usually far more germs on our desks, keyboards, and phones than on toilet seats!

“I don’t think it’s a great idea to French kiss a dog, but having a normal lick on the face is no more dangerous than a kiss from your spouse,” Dr. Simmons concluded.