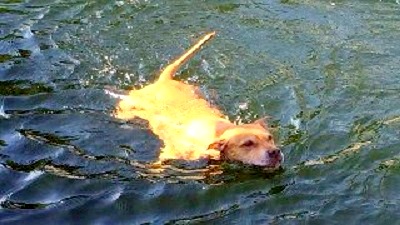 A pit bull named Tyson is lucky to be alive after a recent brush with death:  the 65-pound dog was pulled underwater by a crocodile in Key Largo, but fought back and escaped with only a puncture wound to his leg.

“If it was a smaller dog or a bigger crocodile, Tyson would not have survived,” said owner Emilie Stewart.

Tyson was swimming in a canal behind his home off Blackwater Lane in Key Largo, a known risk for any dog owner in the area.

“I see a croc tail going up, turning the water and Tyson going under,” Stewart said.

Tyson sank, and the croc thought he’d gotten an easy meal.  But the powerhouse fought back.

“I don’t know if he actually bit the croc or bit at him, but it freed him up and he started to swim back.” 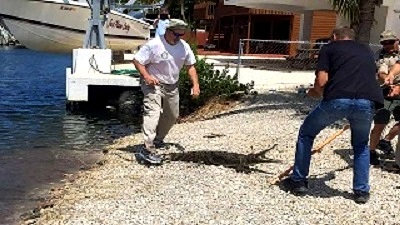 As Tyson swam back toward a boat ramp, the 40-pound croc “literally chased him,” which is unusual – most crocs don’t usually go for prey bigger than they are.

Stewart called Florida Fish and Wildlife officials, who were able to capture and relocate the 5 ½-foot male juvenile American crocodile.

“This crocodile did not act normally,” Stewart said. “It was a fairly little thing, but it was not afraid of humans. It was hissing at the FWC officers trying to catch it.”

Stewart, who has lived on Key Largo for nearly 20 years, said she used to let nine-year-old Tyson swim in the canal “three or four days a week,” for his entire life, but those days are over.

“I’ll never let him swim in there again,” Stewart said. “I’ve gone swimming in there, too, but not again.”

Tyson will make a complete recovery.