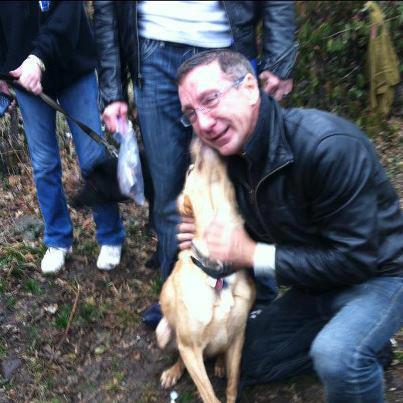 Last month an explosion and fire occurred at an upscale shopping center in Kansas City, Missouri. The explosion frightened a yellow lab named Perceus who went missing from his owner’s medical practice. For weeks Dr. John Verstraete and others searched for his dog and after exhaustive searching Perceus and Verstraete were reunited finally reunited yesterday.

On February 19th a gas leak lead to an explosion and fire that would destroy the popular J.J.’s Restaurant at the Country Club Plaza shopping center in Kansas City. Dr. John Verstraete’s medical practice and spa is located next door to the restaurant. The explosion frightened Perceus and in the chaos and confusion he took off running. For weeks Verstraete and concerned dog lovers searched for him. Verstraete even offered a $1500 reward for the safe return of his dog.

“Each day I haven’t given up hope that he’s out there,” Verstreate had said. The doctor woudl take his other dog Zeus out with him hoping he might catch his brother’s scent. There were several sightings over the weeks of a dog fitting Perceus description, but nothing came of them.

On Saturday another sighting was made. Volunteers quickly searched the neighborhood along with Verstraete and Zeus. Just when Verstraete was getting ready to head home with Zeus a volunteer drove up to give him the news that Perceus had finally been found.

The happy reunion between Verstraete and Perceus was captured on film. Perceus can be seen in footage of the reunion wagging his tail, whining and giving Verstraete kisses, relieved to finally be going home. Perceus had lost some weight but was safe. “I’m so glad that he’s back,” said Verstraete.