Dog missing since 2011 monsoon is home with his family again

It was a joyful reunion for Jessica Rowe and her dog Buddy who had been missing from his Mesa, Arizona home for 2 years.  Buddy, a one eyed pekingese that Rowe adopted from a shelter, was in the yard one day in 2011 when a large storm blew the gate open.  The little dog got scared and bolted and the Rowe family has not seen him since.  Until ten days ago, when they got the call alerting them that Buddy had been found.

Police officer Don Martin was driving down a street in Phoenix when a small dog darted out into the road and collided with Martin’s vehicle.  Martin stopped, fearing the worst, but found Buddy alive and took him straight to a veterinary hospital where they were able to save him. In the process they also found a microchip that led straight back to Rowe. 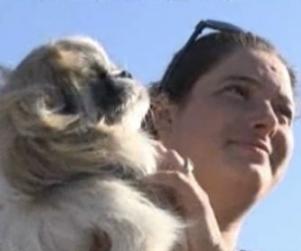 Rowe and her family were overjoyed, especially Rowe’s daughter who was heartbroken when he disappeared.  Says Rowe, “It was almost like losing a sibling for her, she cried a lot, a lot.”   It does appear that Buddy was well cared for during his absence but it is a mystery who he was with or how he ended up in Phoenix, 20 miles from home.

“What potentially was a terrible situation, it turned out incredible. I still can’t believe it,” said a smiling Officer Martin.  Martin, in an incredibly generous gesture, also paid the vet bill and his fellow officers chipped in to buy Buddy a big basket of toys and treats to go back home with.  Rowe considers Martin to be a hero for reuniting her family with their treasured pooch.