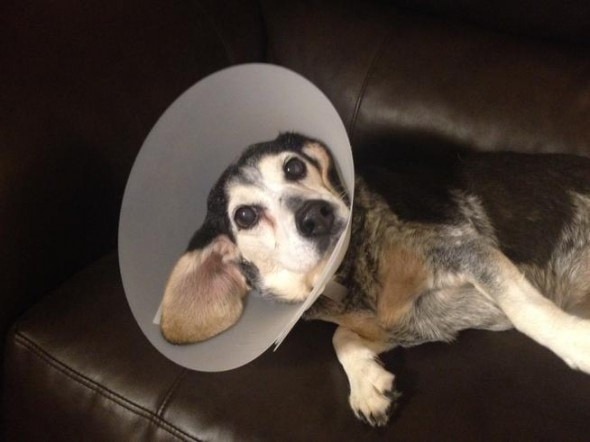 When Keira Ledoux looked out into her backyard late Thursday morning she was horrified at what she saw. A coyote stood ready to pounce on her 11-year-old dog Paige. Ledoux didn’t think but quickly grabbed a bat and ran outside to scare the coyote off, just in time to save Paige’s life.

Ledoux was shocked by what she saw when she looked out the window Thursday morning, but she didn’t’ hesitate to spring into action.

“I jumped up without thinking, and I ran out to the deck, grabbed a bat, and started screaming,” said Ledoux. “It had her by the head, the top of the head, dropped her, and ran into the woods.”

Ledoux then rushed Paige to the vet. Paige had to receive several stitches on one side of her head, but veterinarians say she is a very lucky dog.

“If I was out there one or two seconds later the coyote would have killed her,” said Ledoux.

Paige is now recovering, but the incident has left Ledoux shaken who fears not only for Paige’s safety but her children as well.

Police in South Windsor, Connecticut say coyotes attacking pets happens in their area a few times a year. South Windsor Animal Control says coyotes are native to the area and residents need to keep a close eye on pets and if they do come across a coyote it is recommended to use loud noises and aggressive behavior to let the coyote know they are not welcome.