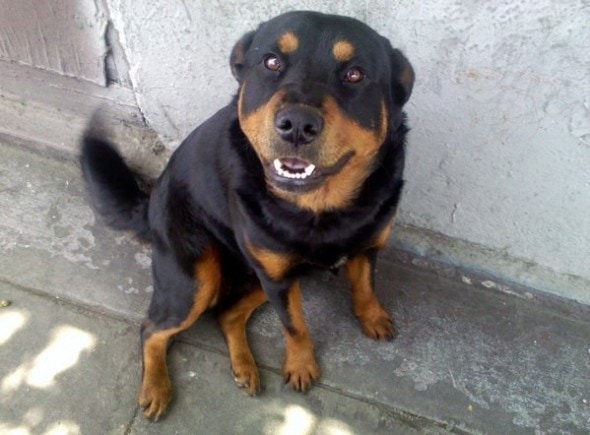 A Rottweiler mix named Gina has been given a new home after surviving a brutal fire that claimed the lives of the rest of her family.

Originally named Genie, the dog lost her family earlier this month when a fire ravaged the small Los Angeles auto repair business she lived in with her owner and several other strays he had rescued.

Lives were lost because the one-story building had double-cylinder deadbolt locks that required keys on both sides to open.

According to a neighbor, Gina’s owner, Victor, had tied her up outside for awhile to serve as a guard – an act that saved her life.

The neighbor, Leticia Cervantes, helped care for the dogs and got them vaccinated and spayed/neutered through Downtown Dog Rescue. The volunteer-run organization relies on grants and donations to help impoverished south LA residents with their dogs’ costs to keep them from ending up in shelters.

Leticia contacted the rescue group, along with the Amanda Foundation, to bring Gina in and find her a new home.

A couple in Santa Barbara read her sad story in the LA Times and applied to adopt her. Their male Rottweiler died in April, and though they were still grieving their loss, their hearts were open to a new love.

Gina is settling in just fine, having already taken over her new dad’s favorite chair, as well as designate a spot for herself on the bed.

“She is a beautiful girl and we are very pleased to have her join our family,” her new dad said. “She is currently napping at my feet in the computer room of our house and seems perfectly content.”