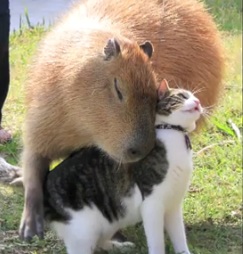 While most people with pets in their home have dogs or cats, every so often people have pets that act like dogs, but aren’t. Such is life for Melanie Typaldos, who shares her home with a dog, cat, rabbits, tortoises, a horse, and even a capybara named Gary.

“He gets on well with the other animals, although he likes to chase the rabbits for fun,” Melanie explained. “He does sometimes get angry with the tortoises because he thinks they invade his space and there is nothing he can do about it.”

The 112-pound rodent is the largest kind in the world, but acts much more like a dog.

“Although some people might find it strange, it’s really no different than having a dog or a cat. Gary is really very smart and he’s very affectionate,” Melanie said. “He learns tricks very quickly – faster than your typical dog would. He knows how to shake, how to turn in a circle, how to stand up on his hind legs and how to jump up on things on command.”

She and her husband, Richard Loveman, fell in love with capybaras while vacationing in Venezuela. They found someone who had them in Arkansas, and brought one to their home in Buda, Texas. Since the rodents spend most of their time in water, Melanie and Richard had an above-ground pool built.

They take Gary to local schools to educate kids about this giant water-dweller, reminding them that they are not the ideal pet for everyone.

“Capybaras can be quite aggressive sometimes and their teeth are very, very sharp,” Melanie said. “Gary is not at all aggressive, but a capybara bite can be pretty serious.”

So while they may not be for everyone, Gary definitely fits right in with the family.