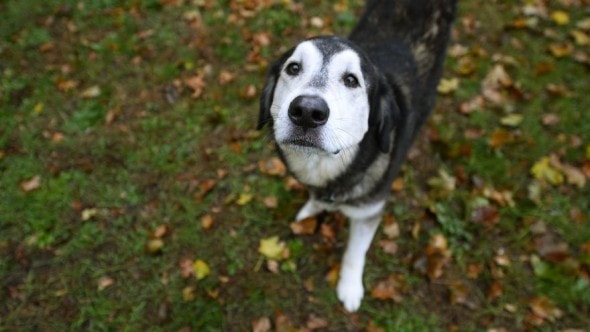 A man accused of robbing a Dollar General store in Dover Township, Pennsylvania, was held up by a dog after he tried to make his escape through the dog’s yard.

According to police reports, a heavy-set man of Hispanic descent held up the Dollar General at gun point.  When the cash was handed to him, he took off and tried to get away by cutting through Tim Luckenbaugh’s yard.

“My dog noticed him, and I ran up to him and I was like ‘Hey can I help you, do you need something?’  He didn’t respond to me, so my dog grabbed onto his arm and pretty much hung on him the whole way from the bottom of my driveway to the top of my driveway,” said Luckenbaugh.  Luckenbaugh said he then chased the man to where a driver in an old, white Dodge Caravan was waiting, parked in his driveway!

“I said, ‘Excuse me, what are you doing in my driveway?’  He said ‘sorry,’ and he put a gun in my face.  I smacked it out of his hands, and when I heard it hit the ground, I realized it was a fake gun,” said Luckenbaugh.  “He took off and I was trying to hang on the door, but he shoved me out.”

This is the first time that anyone has ever seen the dog, Diesel, act aggressively towards anyone.  He is described as a generally stoic, and friendly dog.

“Police said from being a family dog he knew from instinct something was wrong.  He’s never bitten anybody.  I’m glad that he knows from instinct, right or wrong.  So that makes me feel good,” said Luckenbaugh.

The suspects are still at large.  The police have released a description of the man in the store:

The suspect should have a dog bite wound on one arm, and the hoodie would also be torn from Diesel’s bite.  The driver of the getaway vehicle was not described, and is still an unknown suspect.

The store clerk that was help up, Luckenbaugh’s family and, most importantly perhaps, the heroic Diesel are all is perfectly fine medical condition.  No one (other than the robber) was hurt.