UPDATE – 10/29 – This article has been edited to reflect the additional information that has been ascertained since its publication.  Hank was previously described as a support dog rather than a service dog.  Initial reports had few details about Hank’s or Whitman’s conditions, but she has since spoken publicly about both.

She is not – as some commenters were quick to claim – taking advantage of any “system,” and has a genuine need for her dog to be at her side.  Furthermore, she paid for two tickets, and is entitled to use them however she wishes, so long as she is within American Airlines’ rules.

Even if Hank was “only” a support dog, it serves no purpose to vilify people with support dogs as if their needs were not equally as important as those with physical disabilities, just because their conditions are not always visible.  They are not to blame for business owners who turn away people with service OR support dogs.

Additionally, his weight is not a sign of abuse, as others have pointed out.  Whitman is doing what she can to manage it.  Read on to find out what his story is. 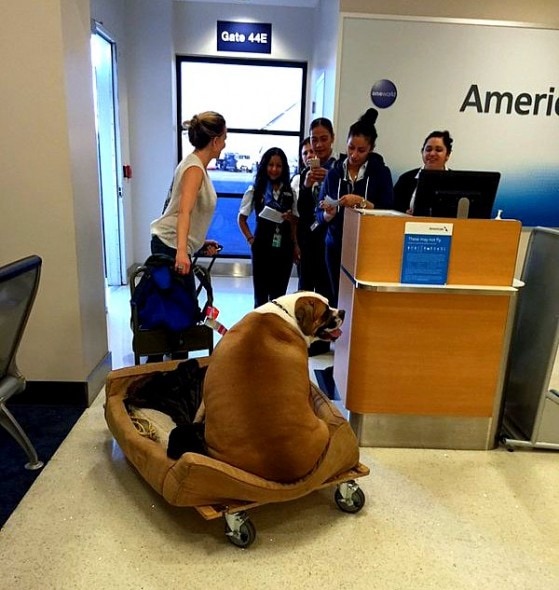 A big old hunk of a dog surprised fellow travelers when he was carted around on his dog bed at LAX, even flying in first class on an American Airlines flight.  But what seemed to catch the most attention was his size…

The photo was tweeted by @madeleinedoux, who noted that she had seen literally the “fattest dog.”

“Everyone, both while boarding the plane and on the plane before takeoff, was speculating as to how the dog got so fat,” Madeleine Sweet told Mashable. “You could legitimately hear hushed whispers of ‘He’s riding first class.’” 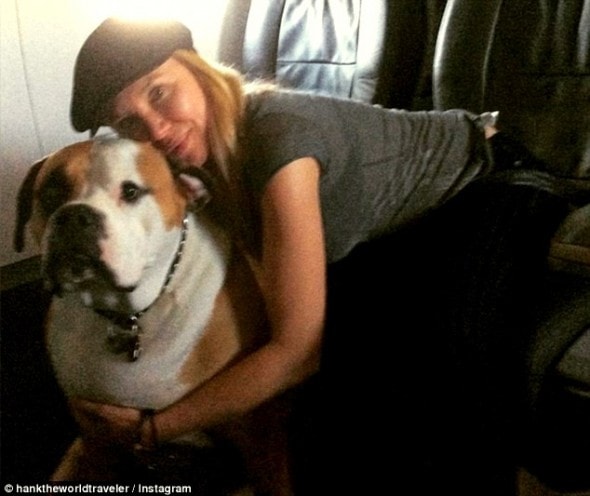 Hank is a service dog for interior designer Kari Whitman, founder of Ace of Hearts Dog Rescue in Beverly Hills.  She suffers from epilepsy, and he can sense oncoming seizures.

He has a thyroid issue, and had a surgery and can no longer walk, which has caused him to gain a lot of weight.  Whitman says he is on a diet of two cups of raw food a day and goes swimming.

He needs a cart to get around, but this dog wants for nothing, and travels in the finest of style – even his cart is luxurious.  He’s got a nice, fluffy dog bed to curl up on as he’s wheeled around.

This fancy flight wasn’t his first, either.  Whitman buys two first class tickets, though Hank is content to sleep at her feet.  This world traveler even has his own Instagram page, which shows him at other airports. 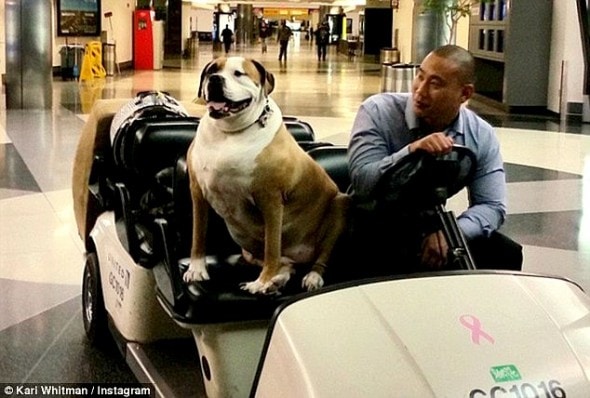