You never know where or when you’ll meet your soul mate, but many people believe that no matter what, it will one day happen.  Well that did happen for a dog rescued from an abusive past.  He was adopted by Joanne Tester, who knew that because of his past, having him around other animals, especially small ones, was going to be tricky.

Fastfeet, as he’s now called came from a dog racing crew in New South Wales, Australia.  He was injured and no longer able to race, so they gave the dog up to the Animal Welfare League.  He spent a few months there recovering and rehabilitating, but he eventually was available for adoption.

Tester has other rescue animals at her home, many of them smaller animals.  Due to a race dog training practice called “baiting,” having a former racing dog around these other small animals may trigger an instinct to chance and kill the small animal.  Thus, why it’s called baiting. 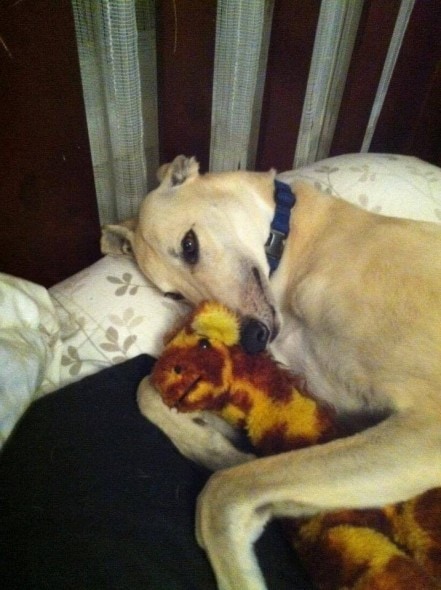 The first time Fastfeet was set up to meet one of the other animals Tester has as family members, it was a dicey situation.  Fastfeet did have protective gear on in the form of a muzzle and lead, and being around the small animals did seem to stir something in the dog.

It took about a year for Fastfeet to become acclimated with the idea of “siblings.”  However, one day something really special happened – something Tester didn’t really think would ever happen.

“I just let one of my cats out so he could see her, and I could see Fastfeet’s reaction,” Joanne told The Dodo in an interview.  “He had his muzzle on and a lead, and I sat with him on the lounge.  As soon as he saw the cat, he wanted to chase her.  I don’t know if he would have hurt her, but he definitely showed too much interest in her.” 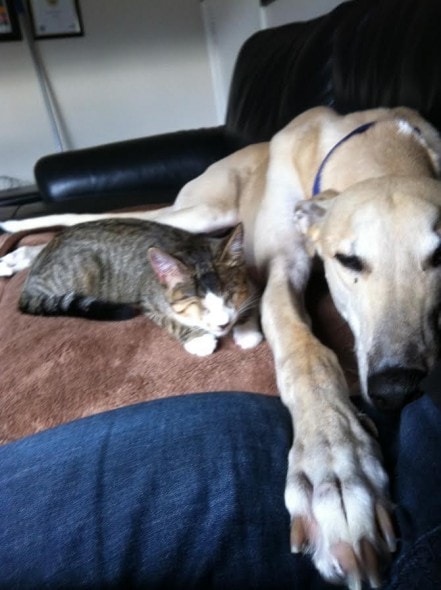 It took almost another year for Fastfeet to get used to the idea of cats.  He eventually did, and things really seemed to be going well.  The cats could actually go up to him, and he didn’t seem to want to give the same chase as before.  He was much calmer.

There was one cat in particular that Fastfeet seemed to like most – a small foster cat called Indi.  Indi was rescued by CatRescue901.  She had been found wandering the streets of Sidney alone, with the flu.  She was so badly infected in her eyes, they had to be removed.

When Indi was first brought into the house, she was kept isolated from the other animals while she healed up from her surgery.  However, Fastfeet wouldn’t be deterred by any isolation tactics. He would repeatedly sneak into Indi’s room, and the two would just hang out together.  As Indi became more allowed to interact with the other animals, it became clear that the two had become a bonded pair. 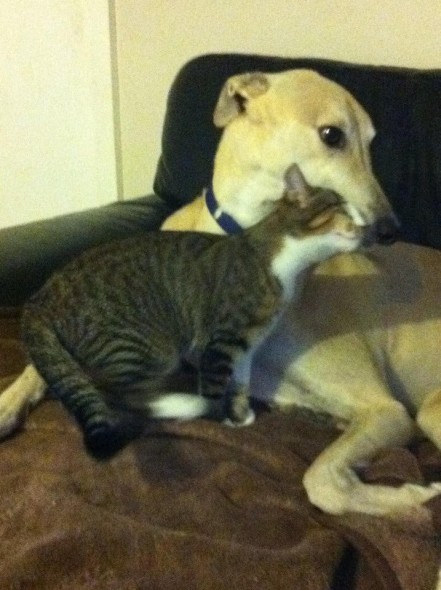 They love playing together in the garden, or just walking around the yard.  What they like to do best however, is cuddle.  They take every chance they can get to just be together.  When Indi got scared by some car noises, she went right to Fastfeet for protection; and laying in the sun seems to be a specialty for these two.

So, the old adage that there is someone out there for everyone must be true.  If an old racing dog and a blind rescue cat can find love, then we suppose that anyone can.  You just have to wait until you find that special someone that completes you. 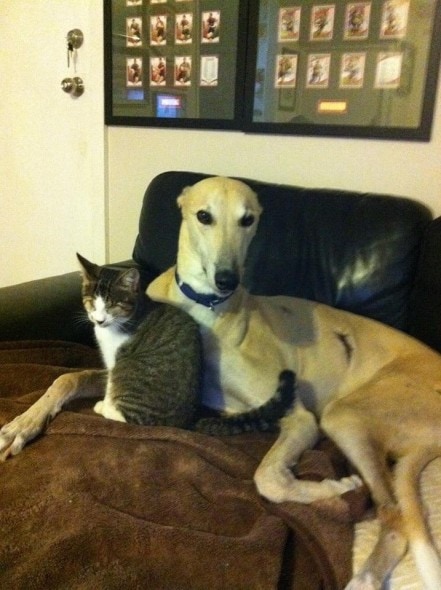