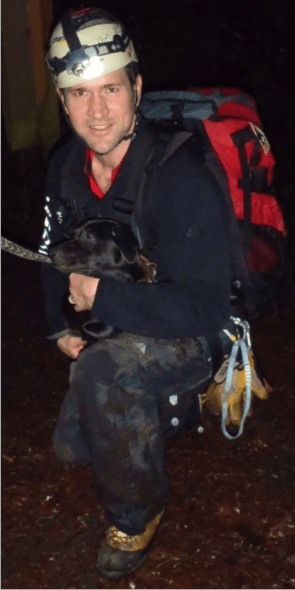 Over the weekend a dog named Rocky fell over a cliff in Portland, Oregon. His owners desperately searched for him but were unable to find or hear him anywhere, and they feared the worst.

On Saturday Iris Higgins was hiking with her dog Rocky when he fell down the cliff. Higgins and some friends searched for the dog all day Saturday but there was no sign of him. Higgins and friends returned again on Sunday to begin searching for Rocky.

Once on the scene they didn’t turn their back on Rocky. The rescuers all had dogs of their own and the conditions were good so rescuer Scott Norton put on his harness to help Rocky. Norton Rappelled about 80 feet down a steep slope and that’s where he found Rocky.

At first Rocky was hesitant to come to Norton even when Norton spoke gently to him and called “good boy.” So Norton switched his approach and commanded Rocky to sit and stay, and Rocky responded.

“He planted his little butt down and quieted down,” said Norton.

Norton fed Rocky some granola bar and then secured Rocky, who weighs about 20 pounds, in his backpack. Then Norton and Rocky were pulled up the cliff by other volunteers.

Higgins was in tears as she was reunited with her dog and plans to never let Rocky off his leash again when hiking. Rocky had a bump on his head but was doing well and was able to hike away on his own.