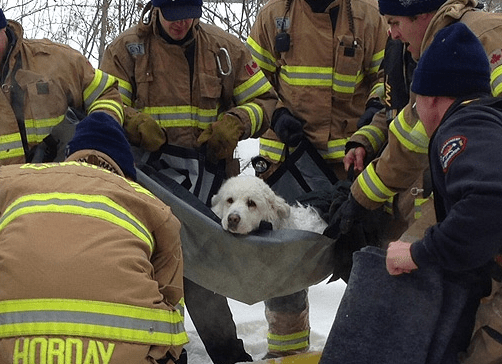 A dog named Rosco is safe and sound after being trapped in the ice of the North Saskatchewan River in Edmonton, Canada for possibly 24 hours. Quick work by firefighter and Rosco’s heavy coat helped save his life.

Rosco, a Great Pyrenees, went missing from his family’s home on Sunday night. The family knew something wasa wrong, but it wasn’t until the next morning that the family’s 13-year-old daughter Mikaela found Rosco trapped in the ice. The family thinks he may have spent the entire night in the river.

Firefighters were called to the scene and quickly got to work on the difficult task of freeing Rosco from the frozen river.

“It’s very steep cliffs over there, almost, it was very hard for the crews to get there,” said Edmonton Fire Rescue Capt. Kelly O’Neill. “They had to chop him out of the ice, actually, with axes, that’s how long he’d been in there.”

Rosco had been stuck in the river so long his lower extremities had become frozen into the river, but once free he was rushed to the veterinarian.

“The vet said that when he came he had a block of ice on his tail the size of a gas can,” said David Baird.

“We cursed that fur all the time, because it’s a full time job keeping the burrs picked out of it,” said Baird. “But I think today it saved his life.”

Rosco may lose his tail, but is otherwise expected to make a full recovery.