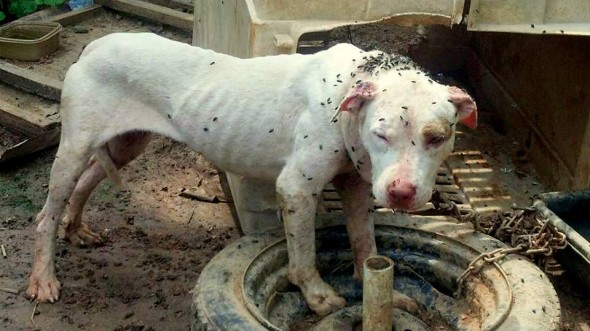 A very lovely dog named Dawn has been rescued from a life of misery in Danville, Virginia after being put on a one-foot chain hooked to a tire.  She has since recovered from her neglect and would love to go to a good home and learn what it’s like to have a loving family.

Dawn was rescued and taken in by the Danville Area Humane Society, who has been getting her much needed medical treatment.  They have followed the court case against her abusers, updating supporters on their Facebook page.

“Cruelty and inadequate care treatment charges have been filed against the owner/custodian of a pit bull type dog. A massive injury to the neck was caused by an embedded collar. The close-up photos of the neck are too graphic to show, but the injury extends all the way around the neck. Maggots and flies were in the wound. The dog is underweight, and has fly bites on her ears, and other wounds on her legs and body. No food or water was provided, and the dog was tethered with a chain that was an inadequate, illegal length. A custody hearing has been scheduled for the afternoon of September 11th. We are requesting ownership of the dog to be given to us. Money to pay for her veterinary care does not come from taxpayer money, but comes from donations. Please consider making a donation to our Katie Fund to help.”

Though it sounds gross, the maggots were actually helping Dawn by eating away at infected tissue from the deeply embedded collar and demodectic mange.

“We’ve named her Dawn because it’s the dawn of a new life for her,” said DHS volunteer Paulette Dean. “She is still at a veterinary clinic, and is patiently undergoing all the cleaning, treatment, etc.” 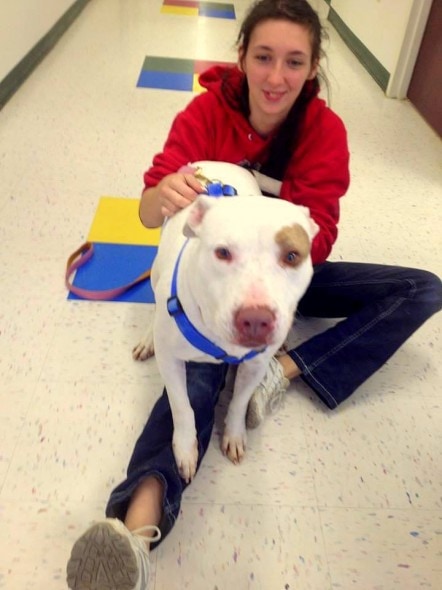 “The cruelty trials involving Dawn, the abused pit bull, were held today in General District Court. The owners/custodians were convicted of cruelty, and they were each sentenced to six months in jail. This picture of Dawn was taken today, about two hours before we left for court. The owners do have the right to note an appeal.”

Their most recent update came just days ago:

“We were in Circuit Court this morning regarding the cruel treatment of Dawn. One of the defendants is still a fugitive, but the Court proceeded with the trial of the other defendant. She was found guilty of cruelty, and was sentenced to a year in jail with eight months suspended. In addition, she cannot own any more companion animals in the City of Danville.”

Though it is unfortunate that justice has not truly been served to Dawn’s abusers, at least this is one girl out of the wrong hands and into a shelter full of caring staff.

Despite all that she had been through, she endured vet visits like a champ, patiently allowing vets and techs to poke, prod and change bandages.  Dawn is a shining example of all dogs are capable of:  though badly mistreated and wasting away in extreme discomfort, she still loves and just wants to be loved.  She has been in a shelter for six months, and though many have expressed interest in her, no one has made a serious effort to adopt her.  If you would like to adopt Dawn, please click here. 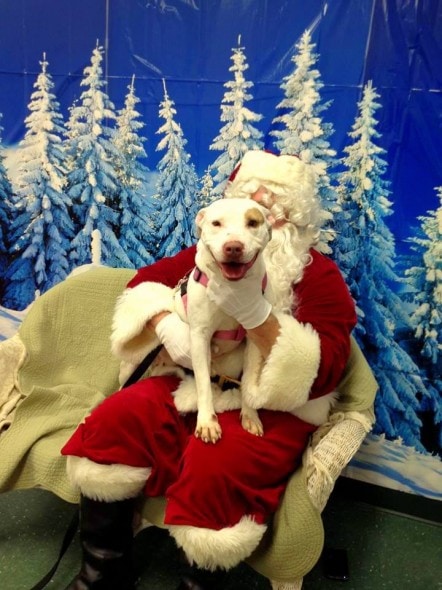