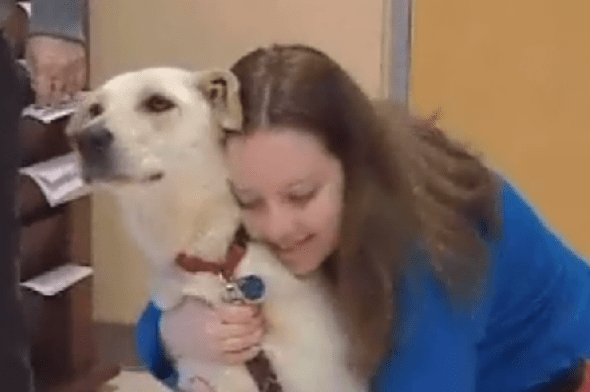 Blondie, a shelter dog, is giving one deaf woman a new life. After being trained through Doggone Express’ From the Big House to Your House training program she will make a big difference in Jaymee Randell’s life.

Randell has spent years looking for a service dog that could help her become more independent.

Then Randell found Blondie online. Blondie had been rescued from Jefferson Parish shelter by the non-profit Doggone Express. Last summer the non-profit began working with two state prisons to help train shelter dogs. Some are trained in basic obedience to make them more adoptable. Others, like Blondie, are given training to become service dogs.

Since From the Big House to Your House project began last summer nearly 40 dogs have been trained. What made the program perfect for Randell is the cost of acquiring one of Doggone Express’ trained service dogs is only a $100 donation. The program is funded through donations and  in part by the Modern American Recycling Services.

When Randell saw Blondie online she knew she had found her dog. When she called to ask about her she was told the dog was already spoken for. What she didn’t know was the person who had already claimed Blondie was her own mother.

On Wednesday Angela Randell surprised her daughter with Blondie. The two will take some time to adapt to each other, but Blondie has been trained to respond to a whistle and a vibrating collar. She also has learned sign language commands.

“We have found that sometimes just being around the recipient the dog will start to alert them just naturally,” said William Barse, director of Doggone Express. “The canine doesn’t know that the recipient, or the owner, can’t hear, but it will continue to do things until it gets the owners attention.”

For Randell Blondie is giving her new hope and a new life. She has been depressed and frustrated with her lack of independence. Just having Blondie in her life is giving her hope.

“Thank you for saving my life,” Randell said when asked if she had anything to say to Blondie.

For more information on Doggone Express and their programs visit their website.