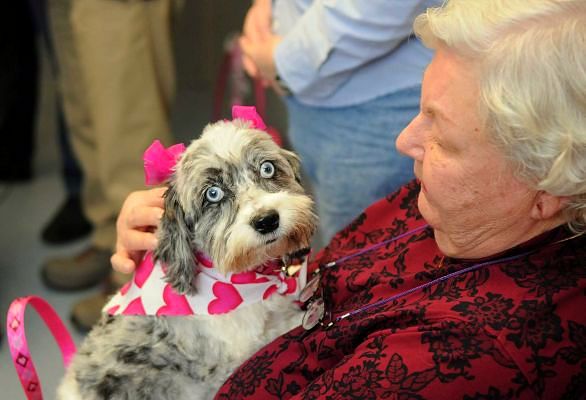 A four-year-old Cockapoo rescued from a gas station trash can by a heroic homeless man celebrated her birthday by getting a haircut, mani-pedi and a new home with a loving family.

Miracle was discovered around Christmas in West Islip on Long Island after having been abandoned by an animal shelter employee who had been paid to take the dog to a kennel by her former owner, who was no longer able to care for her.  Michael Papini was arrested and charged with felony aggravated animal cruelty and misdemeanor animal abandonment.

Councilman Anthony Senft, the hamlet’s liaison for the shelter, said the shelter had selective criteria for finding the right family for Miracle.

“We wanted a home that didn’t have any pets or any children under the age of 10,” he said. “We wanted a family that had some experience with pets and a training plan in mind, and a family with contact with veterinary services.”

Hazel Wagner and her mother were captivated by the dog’s unique lookers.

“My mom had seen the story in the newspaper, and when I came home that day she said, ‘There’s a really cute dog with big eyes up for adoption,’” Wagner explained.  “I said, ‘Ma, you know what? We can go in and put in an application.’”

They weren’t the only ones who took an interest in the little dog.  A panel of assessors made home visits to finalists, and selected the Wagners as the best choice.

“We found some very loving people who were ultimately looking to add another member to their family,” Senft said.

Though she doesn’t know it, Miracle’s adoption day is cause to celebrate for another reason – it’s also her birthday.

The first day spent at her new home was brimming with excitement:  she sniffed out the house, explored snowbanks in the backyard and gave lots of kisses to her family.