Some will call it heroic, while others find it weird, but a Colorado woman saved the life of the four-day-old, orphaned runt of a litter by breastfeeding him when all else failed.  He wouldn’t drink from a bottle, and when he stopped moving, her maternal instincts took over and she did what she had to to save his life.

“I just did it. I never thought I would ever do that. That’s just something it was taboo to me as well,” she said. “I guess you could call it a maternal instinct.”

The puppies’ mother was killed, leaving the newborn Lab mixes to fend for themselves.  The tiniest pup wouldn’t drink dog milk or formula, and was at the brink of death.

“He just wasn’t taking it. I didn’t know what else to do, I was desperate and I just couldn’t bear sitting there, watching him die,” she said.

The woman, who would prefer to remain anonymous, has a 15-month-old baby that has been weaned, and when she saw the struggling puppy failing to thrive, she did what comes natural to any mother.

“He wasn’t moving, and I just did it.  Literally what clicked in my head was like, ‘put him on you, just pray to god he will take something and not die.’” 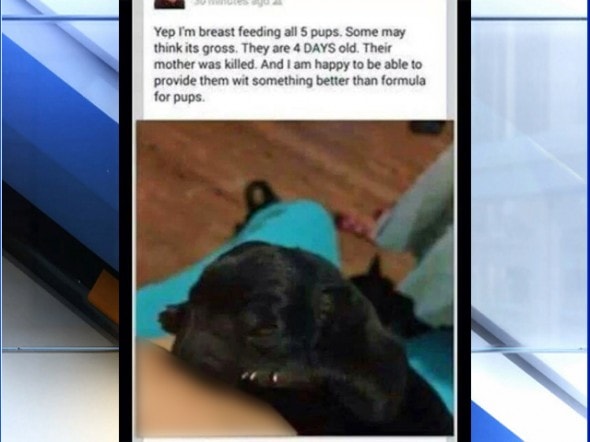 He didn’t.  Her actions saved his life, and now he is flourishing, and no longer as the runt.

“It really reaffirmed what I did was right because I was for myself, quietly, in my mind embarrassed. I was ashamed, I felt weird – it felt weird,” she confessed.

Veterinarian Amber Williams warns against this as a general practice, noting that human breast milk isn’t the most nutritious substance for puppies.

“I’m more concerned about zoonotic disease because there are things that can be passed from puppies to babies,” she explained.

But since the woman’s baby is no longer breastfeeding, it isn’t an issue.

“In an emergency situation, I don’t think it’s a big deal, but for them to grow appropriately I think it would be important for them to get on a K-9 formula,” Dr. Williams said.

Now the little guy, Tubbs, and the rest of the puppies are guzzling down formula from the bottle.