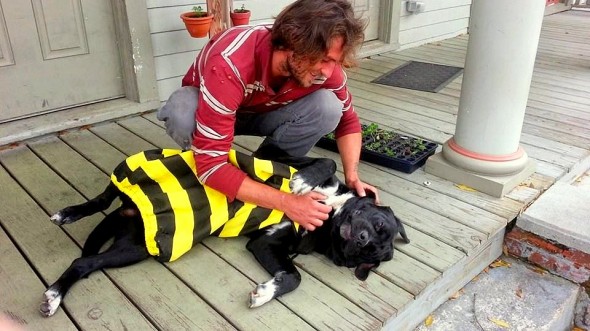 Last month we brought you the sad news of Arzy, the friendly dog who was shot by a Louisiana police officer while he and his owner were traveling from Maine.  The officer resigned during the investigation, and now he has been indicted on a charge of aggravated animal cruelty.

Brandon Carpenter, a traveling musician from Portland, Maine, had his Newfoundland-golden retriever mix Arzy with him while visiting friends in Lake Charles, LA.  They were walking around Sulphur, LA with another friend from Maine, Logan Laliberte.  To dodge a rainstorm, the trekkers sought shelter in the back of an unlocked box truck in the parking lot of the Southwest Daily News.

Carpenter had to tether Arzy and then he and Laliberte were forced to lie facedown on the ground as they were cuffed.  Then Arzy was shot.  Carpenter couldn’t see what had happened, but newspaper circulation manager Eric Midkiff was just arriving and watched Thierbach shoot the non-aggressive dog.

“The dog was rubbing up against the cop,” Midkiff said.  “He would rub the dog’s back and then push him away. All of a sudden, he just jumped down and shot the dog in the head.”

“I saw my dog convulse and shiver and take his last breath,” Carpenter said.  “I saw the blood start to run down his face.  I’m watching my dog die while I’m sitting in cuffs… He (the officer) thought he could shoot my dog and get away with it.”

Thankfully, the Sulphur Police Department conducted a thorough investigation of the incident, and rather than sweep it under the rug and say that Thierbach was acting within his duty, as is the case with so many similar shootings, the officer was found to have not acted accordingly.

The investigation determined that Thierbach “violated the Sulphur Police Department’s Departmental Policy and Procedure regarding Use of Force and Personal Conduct and Behavior.”  Thierbach resigned before he could face “final disciplinary action.”

“I am a dog lover and I am deeply saddened by this incident,” Chief Lewis Coats said in a press release. “I realize there is nothing I can say that would take away the hurt this incident has caused Mr. Brandon Carpenter. The actions of Officer Thierbach did not represent what I expect from the officers of the Sulphur Police Department. Those of us who serve as law enforcement officers do so with the responsibility of serving and protecting the community as professionals. The resignation of Officer Thierbach was accepted so that the officers and community can heal and move forward.”

Now Thierbach has been indicted by a Calcasieu Parish grand jury on a felony charge of aggravated animal cruelty, and a warrant has been issued for his arrest.  His bail has been set at $20,000.  Carpenter’s attorney, Alyson Antoon, said the jury made a quick decision after the hearing.

“We’re very pleased. I’ve seen a lot of the evidence in this case, and from what I’ve seen, they definitely made the right decision,” she said. “The evidence was overwhelming.”

Nothing can bring Arzy back, but these small steps toward justice have been tremendously helpful to the grieving musician.

“[Thierbach] thought I was just a train-hopping punk, and he could shoot my dog and get away with it,” Carpenter said in a telephone interview in April. “You messed with the wrong traveler.”