Claudia Gutierrez’s three pets were snatched from her Laredo home a month ago and even though she has been in contact with the dog snatcher, Gutierrez has only been able to recover one of her pets.

Cookie is Gutierrez beloved pet, and along her two young puppies, they were taken from Gutierrez’s front porch back on September 6th. As soon as they were taken, the dog owner called police, but she was told there was little the authorities could do. 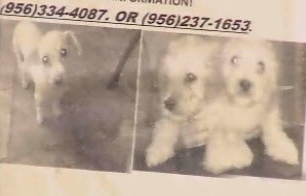 Desperate, Gutierrez posted fliers of her missing pets around her neighborhood, and a few days later she got news of her pets.

“Somebody ended up contacting me through one of the fliers,” said Gutierrez. “The man said he had my dog and the puppies.”

Gutierrez arranged to meet with the dog snatcher and pay him a reward in return of her three dogs, but when they met the man only returned Cookie.

“I met up with him. He gave me my dog [and] said he would give me the puppies if I gave him more money,” Gutierrez said.

The man continued to call her requesting more money and even threatened Gutierrez. He told her he knew where she lived and that she should be very careful. Gutierrez has yet to meet the dog snatcher’s demand in return for the two puppies.

A police report has been filed against the dog thief but Gutierrez is still waiting for authorities to get involved in the case. For now Gutierrez is making sure other neighbors know what happened to her and hopes no one else becomes a victim of this malicious dog snatcher.