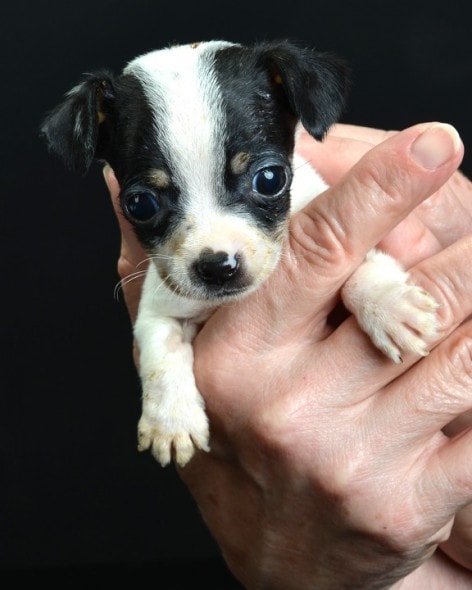 Spot, a Chihuahua mix puppy, has been through a lot for his young age. In mid-August, he was abandoned, alongside his littermates, at Santa Paula Animal Rescue Center, a no-kill animal shelter in Santa Paula, California.

At only 6 weeks old and 9 ounces, Spot already had a heavy worm infestation, a prolapsed rectum and systematic infections. Things were looking dismal for Spot’s chances at a happy life.

The little guy ended up spending 4 days in the ICU, after which the vet declared that there was nothing more they could do but provide supportive care. The rest would be up to Spot. While at the hospital, he had ceased eating and remained lethargic, so the decision was made to return him to his litter mates in a foster home, to either pass away in the comfort of their “puppy pile,” or to fight for his life.

Spot’s prognosis was not good, with his chance of survival pegged at only about 10%. With his foster family, Spot had to receive nutrition at 2 hour intervals, 24-7, which his dedicated foster family administered. Day by day, he received the supportive care that the vet recommended and he Spot chose to fight. He was hanging on!

After a few days in a home, Spot followed his brothers to the food dish and ate on his own. He began to gain weight and energy. Slowly but surely, Spot’s nutritional supplementation was extended to 3 and 4 hour intervals. Today, at 15 weeks of age and a whole 1 pound 3 ounces, Spot can go 6 hours between feedings, a significant improvement!

Spot continues to recover but his future is looking much brighter, thanks to a dedicated foster home willing to give him the supportive care needed and to Spot’s persistent will to live. Spot is only one example of the impact that rescues and foster homes can have, even for pets that seem to have little chance of recovery. A little love can go a long way!

Santa Paula Animal Rescue Center is a 501(c)3, non-profit, open admission, no-kill animal shelter serving the animal control function for the city of Santa Paula in Ventura County, California. They are a community based shelter dedicated to an animal as long as it takes to find them a home and their motto is “whatever it takes.”