When Faith was found in August, she was dirty, emaciated and just barely clinging to life. At any other shelter, she would have been put to sleep, if only to spare her any further suffering. But the devoted staff of the Seal Beach Animal Care Center knew that with a little faith and a little love, she could thrive – and she did.

When Faith was brought into the Seal Beach Animal Care Center, she was so skeletal that staff thought she was dead. But her little paw twitched, sparking hope that she could survive.

Staff didn’t believe the man who claimed to have found her at a Seal Beach, California weapons station while walking with his daughter. He left a fake number and never came back to check on Faith. The area in which he said he found her is rife with ravenous coyotes, who would be unlikely to pass up a defenseless dog.

The three-year-old girl weighed only four pounds (less than half of what she should have), and because her organs were shutting down, had to be put on oxygen and a feeding tube for nine days. Faith was so weak she could not even lift her head.

“But when they were shaving her, she wagged her tail,” said Jane Parnes.

She was in such bad shape, her hair had lost most of its pigment. But volunteers like Barbara Christensen didn’t give up hope. She spoon-fed Faith three times a day. She also bathed her, gave her medication and dolled her up in outfits sent in by the many people around the world who wished her well.

“It’s her will to survive that people respond to,” Barbara said. 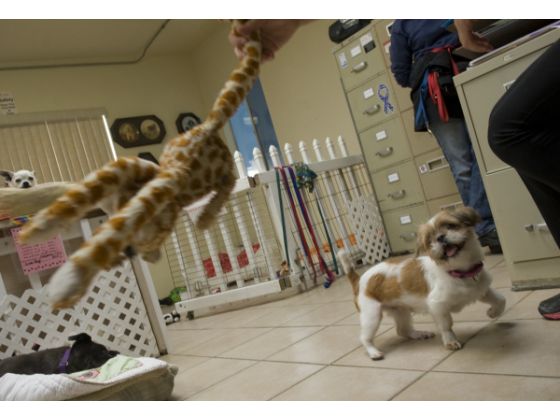 Within a few short months, Faith was a sparkling gem at Seal Beach, beloved by all whose lives she had touched.

“For a long time after she came back, her feet never touched the ground,” Jane said, because people wanted to carry Faith everywhere.

Now she frolics around the office with Picasso, her “pet” Chihuahua, who always tags along with her. Though it will pain staff to say goodbye, it’s time to find Faith a forever home. Applications have flooded in, but they’re looking for more. The entire family has to visit the shelter before they’re willing to part with her.

Faith still must be hand-fed, so she doesn’t gobble down food too fast. She’s a little bossy, very active, and doesn’t like to be left alone, so finding the right home can be a challenge. But staff members know many would love to make her an addition to their family. After all this girl’s gone through, she deserves to be every bit as spoiled as she has been.

To adopt Faith, or any of the other animals at Seal Beach who need homes, please click here.

0 thoughts on “Dog Stares Death in the Face and Triumphs”