Fulton County, Georgia officials are seeking the person(s) responsible for a shocking case of dog abuse.

UPDATE (12-7-11): ‘Arrow’ has been adopted. Kevin Bryant, executive director of the non-profit organization Pets are Loving Support, said he and Arrow were meant to find one another. Bryant lost a dog to cancer recently and was not certain if he was ready for another dog, but once he met Arrow he says he knew he was making the right choice.

“There’s a really strong bond between the two of us. He loves me just as much as I love him,” Bryant said. “He came up to me, I knew right away. I knew what I had to offer and my thought was I am trying to heal also just like Arrow is trying to heal and we can probably both do that for each other. It has, he has helped me heal in so many ways, it’s unimaginable.”

The pit bull mix was found Tuesday, September 13th in southwest Atlanta. A resident called police after seeing the skewered dog running free. “This is an act of animal cruelty, plain and simple,” said Tony Phillips, assistant director of Fulton County Environment and Community Development. “We cannot tolerate this type of inhumane behavior in Fulton County and will use all available means to identify the perpetrators.” 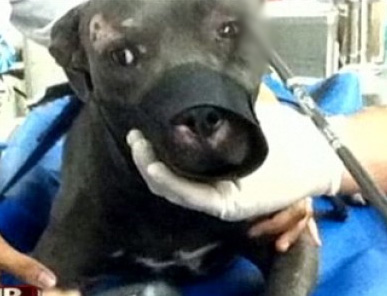 Miraculously, the dog is expected to make a full recovery, but police want your help in tracking down his abuser. Anyone with information regarding the case is asked to contact animal services at 404-613-0358.