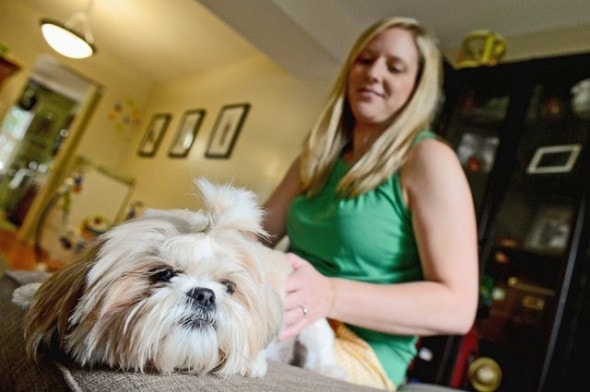 Chloe’s life eight months ago was drastically different than the one she’s living today. Stabbed seven times with a steak knife the Shih Tzu has made a remarkable recovery and is settling in with a new family.

In September, Chloe was known as Coco and was living with her previous owner in Washington D.C. Her owner had a brother who suffered from mental illness, including dementia. One day the brother failed to take his medicine and it led to horrific consequences. He attacked Chloe with a 4-inch knife claiming she was Satan. Police came to Chloe’s rescue and rushed her to an animal hospital.

Luckily for Chloe none of the stabs had hit any of her vital organs. Doctors stitched and bandaged her up and she recovered remarkably well.

“She was very lucky,” said Scot Giacoppo, a spokesperson with the Washington Humane Society. “Just imagine what it would be like to pick up that dog and start stabbing her. It’s heart-wrenching.”

Once in recovery Chloe needed a foster home and she found one with one of the animal hospital’s doctors, Dr. Abby Dunlap, who had recently lost her own dog. Although Dunlap wasn’t sure if she would end up keeping Chloe permanently, Chloe soon won her over and her husband as well.

Chloe is settling in well with her new family which includes the new addition of a 7-month-old baby boy. The gentle way she interacts with everyone in the family, you would never guess the horror she went through only eight months ago.