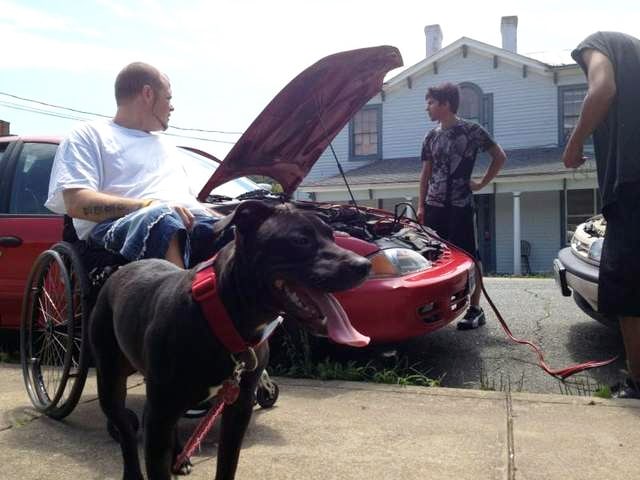 A wheelchair-bound Virginia man says his dog saved his life when he stood down an armed gunman during an attempted robbery.

An armed robber forced his way into Shannon Baber’s Maple Street apartment, and Baber, paralyzed from an earlier spine injury, wheeled himself into the kitchen at the back of the first-floor apartment as his dog faced down the intruder.

Boss, Baber’s 9-month-old pitbull, nearly gave his life in the process of protecting his master.

“He’s very lucky. With the jugular right there and it going into his chest,” said Boss’s veterinarian Laura Kivlighan. “Just a little further is his heart and lungs. It’s very lucky.”

When the robber fled, Boss came limping back to Baber, bleeding profusely, he said. “It was like a murder scene.”

Boss is healing well and is expected to make a full recovery. The loyal dog has gained a number of admirers as word of his heroic deed spreads. “I would hope my dog would do that for me,” Kivlighan said. “He’s a great dog.”

Baber said he hopes the story will help to dispel the myth that pit bulls are mean, and Laura Kivlighan agrees. “It’s all how you train them,” Kivlighan said. “I love pitbulls.”

Lisa Klein, spokeswoman for the Staunton Police Department, said the robbery is still under investigation.