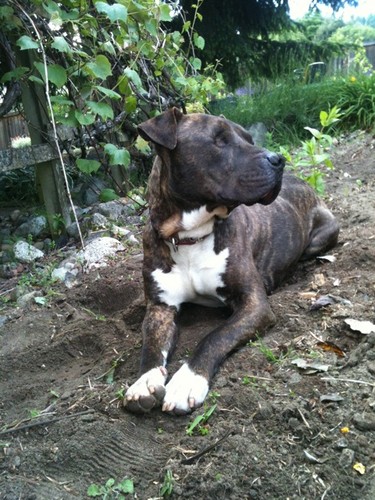 A few weeks ago, a one-eyed, 3-year-old, homeless pit bull named “Harvard” received a beautiful gift from a special woman in Washington who hoped to see him find a forever home.

That gift was a glorious “vacation from the shelter” – a weekend full of pampering, love, sunshine and freedom. Harvard has been housed at the Kitsap Humane Society since this past February. Suffice to say, the months behind bars have taken their toll.

The woman who gave Harvard his special vacation is Tracy Dunham, and her motivation for providing this respite weekend is nothing short of beautiful. Dunham recently lost her own beloved standard poodle, “Simone”, to cancer. When it was evident that Simone would not be able to beat the disease, Dunham took her to the beach…carrying Simone’s weak body down the stairs to the warm sand by the ocean.

Together, the ailing dog and the grieving owner sat side by side, listening to the waves and enjoying a special day together.

Years before, someone had rescued Simone after she was discarded by another…that someone gave Tracy Dunham an amazing gift when they recognized Simone’s beauty, despite her emaciated, neglected body. That individual’s efforts, so many years ago, provided Tracy Dunham with her best friend for the next twelve years. On Simone and Tracy’s special day at the beach, an idea formed in Tracy’s mind – a way to honor her best 4-legged friend’s life.

She decided to offer a sheltered dog a special weekend away from their dreary kennel run, saying:

I decided as I sat on the beach with Simone that when she passed I would take shelter dogs to my home to give them a respite weekend, lift their spirits, and hopefully someone might see that same light I saw in Simone so many years ago.

Which is exactly how Harvard came to enjoy a weekend away from the kennel run which had been his “home” for so many months at the Humane Society. Dunham chose Harvard for the “weekend away” because she knew that he was losing hope behind bars.

Last Friday, the one-eyed pit bull had the time of his life by Dunham’s side. The following is a snippet of their weekend adventure:

This boy adores people and is willing to work hard to please. Harvard visited two dog stores on his vacay and impressed everyone with his good manners and obedience. He met many people on his weekend out of the kennel and was friendly and appreciative of pets and attention from both children and adults. He knows sit and down and is working on a new skill, bed. If he is allowed to sleep in the bedroom on a dog bed he is quite and does not get up until you take him out.

He loves to lay in your lap and get pets, he is an affectionate guy. On walks he acknowledged other dogs but did not over react to them.

Like all vacations, Harvard’s had to come to an end. Dunham describes his heartache:

Sadly, when walked him into the building, I could see the sadness overtake him. He did not resist going back into the cold enclosure that he has known for so many months, I was asking him to do it and he went willingly. When I went back to check on him a few hours later all the signs of stress were back, he cowered down when I approached the kennel and barked a lot at the other dogs that passed by.

Tracy Dunham worries about Harvard…he is a one-eyed, “disabled”, adult pit bull who is stressed and unhappy at the shelter facility.

Who would want to adopt such a dog?

Perhaps someone who reads this article and knows that a loving dog desperately wants to give his loyal heart to someone will provide him with that chance, she says.

Please take a moment to share Harvard’s story. You can access his profile and shelter information at this link.