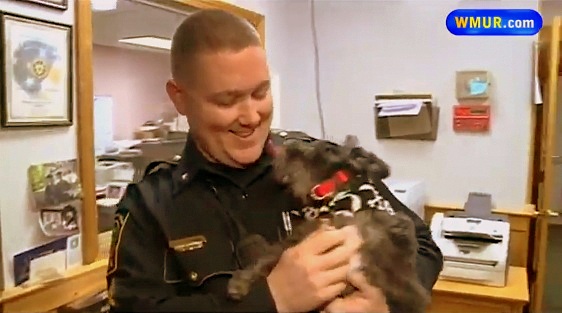 Police officers from Farmington, New Hampshire came to the rescue of a tiny dog named Mit when he started choking on a dental chew bone. It wasn’t their training or any special technique that helped save this little guy, but patience, cool-headedness and a pair of pliers.

Nicole Dale gave her seven-year-old Pomeranian-poodle mix his nightly treat, but on this night he may have eaten his last.

“He gets a dental bone every night and didn’t chew it this time – he just swallowed it and it wouldn’t come back up,” she said.

Nicole and her mother both tried to help Mit, but didn’t know what to do. It was 8 o’clock, and the closest vet open was 25 miles away. Mit would never make it.

“My mom not knowing what to do, put him in the car and drove around and couldn’t figure out where else to go and came here,” Nicole explained.

Lisa Dale rang the bell at the police station.

“She said the dog was choking and asked if I knew the Heimlich maneuver for canines, which I don’t know,” said Officer Tom McNulty, who opened the door to see the woman holding a dog in her arms.

“It was in obvious distress, struggling to breathe,” said Sergeant Scott Orlando.

McNulty put on a pair of gloves and held Mit’s mouth open. Orlando held him still.

“The dog was so small, we couldn’t get our fingers in the mouth to grab the bone,” McNulty said.

Detective Matt Embry used a pair of pliers to pull the bone out. Within seconds, Mit seemed back to normal.

“We weren’t able to reach it with just our hands,” said Detective Matt Embrey. “With everyone holding the dog down, I reached in with pliers and pulled the bone fragment out.”

“I was so happy that someone was here to help him,” Nicole said. “He definitely would’ve died if they didn’t pull it out. They went above and beyond. He wouldn’t have made it if he had to go to the vet because he wasn’t breathing.”

This is not the first time Sgt. Orlando has saved a dog in peril; last month he helped pull a dog out of a well.

“It’s just what we do,” said Orlando. “It’s great to be able to help people within the community. And, it’s good to know people will turn to us in different types of emergencies.”

“He was so happy and excited, running around wagging his tail,” said Embrey. “We tried to give him water but all he wanted to do was play. It felt good to be able to help out.”

“I don’t know how you thank someone for saving your best friend’s life,” Nicole pondered. “I’m so grateful.”

“Being a dog owner, I know how important dogs are to a home,” said Orlando, who owns two dogs. “They’re like children in some homes. We try to treat them that way.”