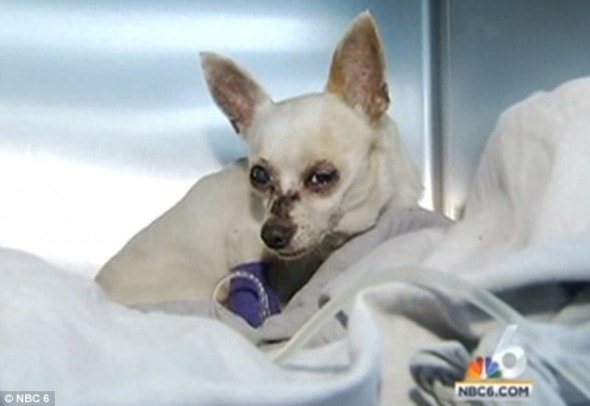 Angel is a Chihuahua that has recently been rescued by Miami-Dade Animal Services.  Reports say that the blind dog was found in a mangrove forest in the Miami, Florida area, taped to a tree.  Angel, whom is blind, appeared to have been part of a voodoo ritual.

When law enforcement had arrived on the scene, someone had cut the dog out of the cocoon of tape he had been wrapped up in and hung in the tree with.  Angel was loose and running around, but residents in the area were saying the dog was definitely in the tape ball that was clearly still in the tree.

Bill Flett, one of the people on the scene, told reporters, “On the edge of the forest, we found duct tape hanging from a nail and the evidence points to the fact that the dog was covered in duct tape in like a cocoon and nailed to the back of a palm tree.”

Dead animal bones were also found scattered about the area when Angel had been taped to.  This has led some officials to believe that the dog may have been part of a ritual performed by someone that practices Santeria.

Santeria is a religion more closely associated with other, voodoo like religions born of Afro-Caribbean descent.  It’s also knows as La Regla Lucumi and the Rule of Osha.  It includes voodoo/animist beliefs along with some elements of the Roman Catholic religion as well.

According to research, animal sacrifice is something central to the Santeria faith.  It’s thought to have grown out of the slave trade in Cuba.

Miami-Dade Animal Service workers were happy to report that Angel is no worse for the ware, and is recovering at their animal care facility.  He wasn’t really hurt in any discernable way, and if his owners do not come to claim him within the appropriate time period, Angel will be up for adoption.