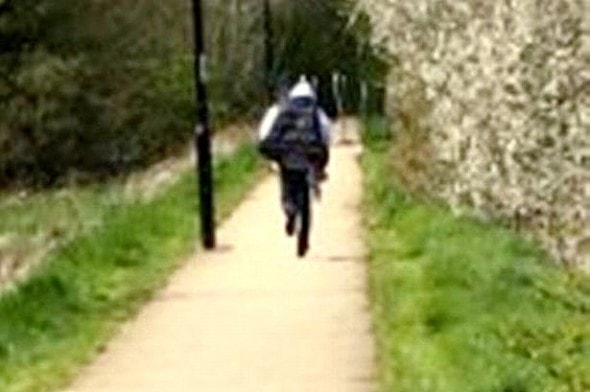 A woman in England was walking a dog when she saw a young man about to ruthlessly hang a cat from a tree.  Thankfully, she stopped him, saving the cat’s life.

Kerry Reeve of Coventry, West Midlands, was out walking her dog when she saw a man holding a ginger cat by the scruff of its neck.  When she noticed that it had a red string or small rope around its neck, she sprang into action.  This is what she told the Coventry Telegraph:

I didn’t think anything of it until I saw a lad on his own crouching down, which was a bit unusual.

I got a bit further up the path where I was in line with him, and when I glanced over, he was stood up and had a ginger cat at the scruff of its neck.

It was clear what he was about to do.

He eventually put the cat down but five minutes after walking away he came back to the bushes for something, but I had no idea what.

It was all very creepy and surreal.

It was such a mix of emotions, I couldn’t quite believe what I was seeing, and at the same time I was thinking what he could be capable of.

I was on the phone to the police but while I was waiting I called a man over to help me.

I don’t think the lad took me seriously when I said I was phoning the police as he just seemed to hang around the area and lie on a grass bank.

But as he was lying there he saw the police coming towards him and he scarpered into an estate where he lost them.

It was extremely worrying because I could see how calm and collected he was about the experience. It was like he almost enjoyed the chase.

I didn’t really think I was in any danger from him. It was the cat that I was more concerned about, who knew what he could have done if I wasn’t there.

Who knows what sinister things he could go on to do next?

That is a horrifying thought, as people who torture and kill animals generally only stop because they are caught, and have little reason to change their behavior.  But hopefully something will compel this person seek help from a mental health specialist and change his ways.