When Ramon Llamas took his dog Mole for a walk on a mountain, he never expected that he would wind up helping save a life.

Llamas and his friends were hiking on Mt. Rubidoux in Riverside, California earlier this week when his dog began whining and tugging on his pant leg to pull him toward some boulders.  Mole had made an astonishing discovery:  wedged between two of the massive rocks was another hiker.

“I saw big eyes,” Llamas said, who at first believed what he was seeing was a trapped animal. 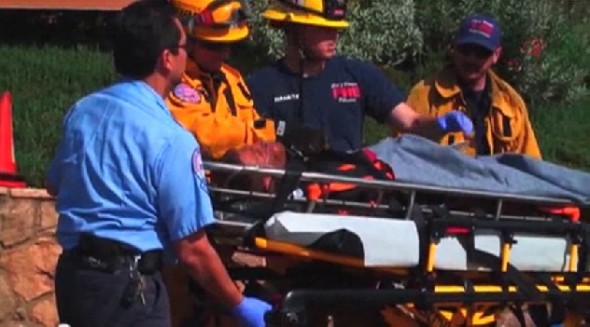 The group called 911 and emergency crews took the weakened man to a hospital.  He was severely dehydrated.  The man, who identified himself only as Paul, told the hikers he was looking for some shade and got his foot caught in the rock crevice.  He had been trapped for 4-6 days and did not have a cell phone to call for help.

“He’d be dead if it wasn’t for that dog,” according to one of the paramedics.

“For saving Paul’s life, Mole will receive a Heroic Mutt Award from PETA along with a special ‘doggie bag’ full of vegan dog treats, a comfortable new harness, and a fun toy,” according to PETA’s press release on the event.

“Dogs are more than our best friends — as Mole demonstrated, they’re our family members, our protectors, and our heroes,” said PETA Executive Vice President Tracy Reiman.  “PETA hopes that Mole’s tenacity and care will inspire anyone looking for a dog to head to an animal shelter — they’re full of lovable, wonderful mutts just like Mole.”