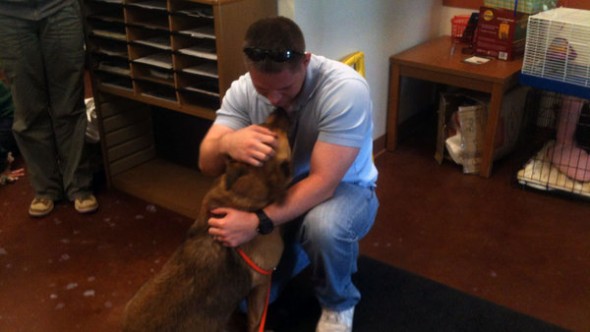 It was seven months ago that Fourth of July fireworks frightened a German Shepherd mix name Dora and caused her to flee her family’s backyard. Now after all that time she is finally reunited with her family.

When the fireworks went off last Fourth of July in Frisco, California, the O’Bryan family’s dog Dora got very frightened. The German Shepherd mix jumped over the family’s fence and wasn’t seen again. The O’Bryan family searched everywhere and posted photos of Dora online, but didn’t find a single lead of their missing dog.

Finally this Tuesday morning, seven months after Dora had gone missing, a Collin County animal control officer picked up a dog about 20 miles away from the O’Bryan’s home. A microchip revealed it was in fact Dora. Kery O’Bryan drove to the animal shelter for an emotional reunion with Dora.