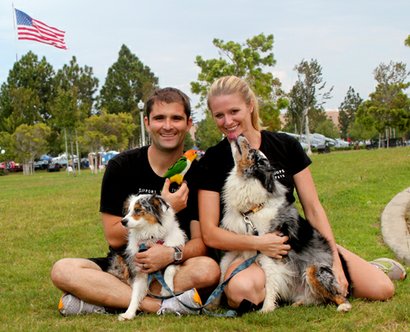 Alisa Johnson is an active-duty officer in the Marine Corps and in Naval Flight training at NAS Corpus Christi. Along with her husband, also in the military, she founded Dogs on Deployment, a non-profit that helps find temporary homes for the dogs of deployed troops. Now she has been nominated for Military Spouse of the Year for her work.

Dogs on Deployment has prevented numerous dogs from ending up in shelters by finding them safe temporary housing while their owners are deployed. Founded in June of 2011 they have created a central online database for service members to search for individuals and families that are willing to care for their pet while they are deployed.

In addition to helping soldiers not worry about their beloved pets while deployed, Dogs on Deployment has been actively working to end breed discrimination in military base housing. Their goal is to get the Department of Defense to create a uniform, standardized pet policy for all military installations. Currently, breed bans and other restrictions differ from base to base which leads to many military families having to give up their beloved pets when they are reassigned to a new base.

Johnson is thrilled to be nominated as Military Spouse of the Year and the opportunity it will give her and Dogs on Deployment. “The exposure for our mission to educate, advocate and support the military-pet community will be tremendous.”

The winners of each branch of the military will be announced on February 21st and the national vote will take place on March 5th. For more information about the contest go to msoy.militaryspouse.com