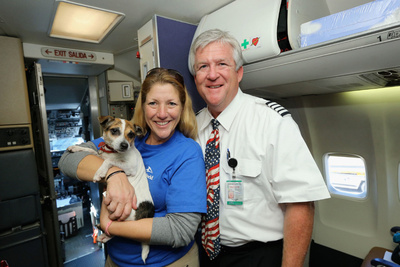 A special flight took off from Newark, New Jersey on Saturday arriving in San Diego, California. Filled with 60 animals that were displaced by superstorm Sandy, this flight saved these animals from being euthanized.

The dogs and cat aboard the flight were at New York and New Jersey animal shelters when Sandy hit and were facing euthanization because those shelters lost power from the storm. The Helen Woodward Animal Center in Rancho Santa Fe, California approached Southwest Airlines and SeaWorld to help rescue these dogs and cats. The pilot and crew donated their time, BP paid for the necessary gas and animal handlers from Seaworld supervised the animals on the cross-country flight.

“It sounded like you were in a dog kennel.” Said pilot Bert Seither. “They were unsure, and they started yelping when we took off, but once we started leveling off, they calmed down.” Now that the dogs and cats are safely in California the Woodward Center will vaccinate and spay or neuter them all to prepare for adoption. Some may be ready as early as Wednesday to be adopted. Thanks to the time and efforts of everyone involved these 30 dogs and 30 cats have a second chance. “These animals were going to be put down if they weren’t moved,” Seither said. “This is the only chance these animals had.”