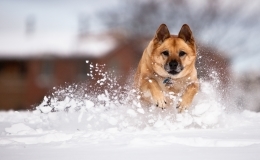 If you’re a runner you know that euphoric feeling known as “runner’s high.”  Now it turns out that dogs get that same feeling after a good run. Dr. David A. Raichlen, an anthropologist at the University of Arizona, led a research team that investigated this phenomenon. Their theory is that dogs and humans evolved to feel this strong physiological reward.

According to Raichlen’s team, dogs and humans love to run because it gives them a natural high reminiscent of the one marijuana imbibers get from that leafy substance. They posited that dogs and humans evolved to experience the same euphoria as induced from endocannabinoids in pot to encourage them to run and even enjoy it.  Then, Raichlen suggests, the running made it easier for both dogs and humans to survice so the good feelings became “hard-wired” in their brains to encourage more running. The team looked at three species – dogs, humans and ferrets—to compare the three species’ reactions to running and their ability to run. The ferrets were chosen because ferrets are not good at running.

Raichlen and his team put a dog, a human and a ferret on a treadmill for thirty minutes and then took blood from them to test it for various chemicals. They then tested the subjects’ blood samples while the dog and human walked and the ferret rested. They found that the ferret had no change but the human and the dog both had increased endocannabinoids in their bloodstreams. Although these chemicals are similar to those in cannabis plants the chemicals are actually produced in human and dog bodies. The chemicals produce feelings of happiness and well-being.

Raichlen has suggested from this research that humans and dogs evolved to have intense aerobic exercise. Ferrets and other non-running animals, he suggests, are not evolved to run or they would also get a “runner’s high.”

So the next time your dog wants to run, you’ll know he’s just feeding that evolutionary call of the high.