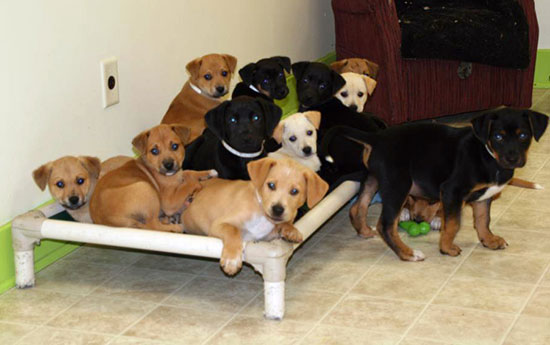 Last Friday night seventeen puppies and a female dog assumed to be the mother of about half of those puppies were abandoned in a wooded area near the Indiana Dunes State Park. Thankfully Karen Read came to their rescue and helped save the puppies and mother dog. Now all seventeen puppies have families lined up take them home and the mother dog is safe in a foster home.

All the dogs were taken in by Lakeshore PAWS. The puppies were all healthy and in good condition and are estimated to be about six to eight weeks old.

More than 70 applications were received just days after the puppies were rescued. Lakeshore PAWS have matched each puppy with a family. The seventeen puppies are all Labrador mixes and will be spayed and neutered before going home with their new families next week.

The mother dog is staying with foster mom Maura Myers. She is underweight and wary of new people after going through her ordeal but is expected to do well with some extra love and care. When she is ready she will be put up for adoption.

Authorities are still searching for those responsible for dumping the mother dog and the puppies. Anyone with information is asked to call Porter County Animal Control at (219) 477-3310.