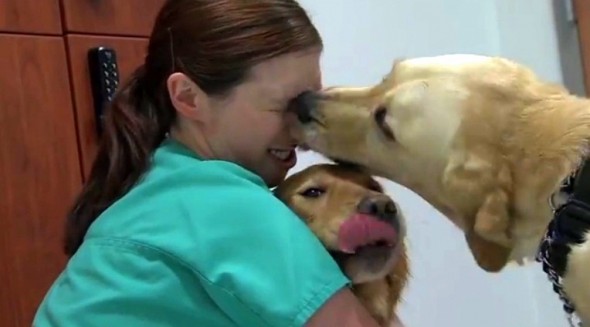 FOR the past two years, my colleagues and I have been training dogs to go in an M.R.I. scanner — completely awake and unrestrained. Our goal has been to determine how dogs’ brains work and, even more important, what they think of us humans.

Now, after training and scanning a dozen dogs, my one inescapable conclusion is this: dogs are people, too.

Because dogs can’t speak, scientists have relied on behavioral observations to infer what dogs are thinking. It is a tricky business. You can’t ask a dog why he does something. And you certainly can’t ask him how he feels. The prospect of ferreting out animal emotions scares many scientists. After all, animal research is big business. It has been easy to sidestep the difficult questions about animal sentience and emotions because they have been unanswerable.

By looking directly at their brains and bypassing the constraints of behaviorism, M.R.I.s can tell us about dogs’ internal states. M.R.I.s are conducted in loud, confined spaces. People don’t like them, and you have to hold absolutely still during the procedure. Conventional veterinary practice says you have to anesthetize animals so they don’t move during a scan. But you can’t study brain function in an anesthetized animal. At least not anything interesting like perception or emotion.

From the beginning, we treated the dogs as persons. We had a consent form, which was modeled after a child’s consent form but signed by the dog’s owner. We emphasized that participation was voluntary, and that the dog had the right to quit the study. We used only positive training methods. No sedation. No restraints. If the dogs didn’t want to be in the M.R.I. scanner, they could leave. Same as any human volunteer. 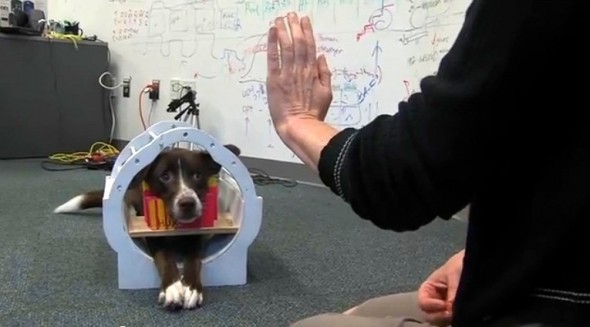 My dog Callie was the first. Rescued from a shelter, Callie was a skinny black terrier mix, what is called a feist in the southern Appalachians, from where she came. True to her roots, she preferred hunting squirrels and rabbits in the backyard to curling up in my lap. She had a natural inquisitiveness, which probably landed her in the shelter in the first place, but also made training a breeze.

With the help of my friend Mark Spivak, a dog trainer, we started teaching Callie to go into an M.R.I. simulator that I built in my living room. She learned to walk up steps into a tube, place her head in a custom-fitted chin rest, and hold rock-still for periods of up to 30 seconds. Oh, and she had to learn to wear earmuffs to protect her sensitive hearing from the 95 decibels of noise the scanner makes.

After months of training and some trial-and-error at the real M.R.I. scanner, we were rewarded with the first maps of brain activity. For our first tests, we measured Callie’s brain response to two hand signals in the scanner. In later experiments, not yet published, we determined which parts of her brain distinguished the scents of familiar and unfamiliar dogs and humans.

Soon, the local dog community learned of our quest to determine what dogs are thinking. Within a year, we had assembled a team of a dozen dogs who were all “M.R.I.-certified.”

Although we are just beginning to answer basic questions about the canine brain, we cannot ignore the striking similarity between dogs and humans in both the structure and function of a key brain region: the caudate nucleus.

Rich in dopamine receptors, the caudate sits between the brainstem and the cortex. In humans, the caudate plays a key role in the anticipation of things we enjoy, like food, love and money. But can we flip this association around and infer what a person is thinking just by measuring caudate activity? Because of the overwhelming complexity of how different parts of the brain are connected to one another, it is not usually possible to pin a single cognitive function or emotion to a single brain region.

But the caudate may be an exception. Specific parts of the caudate stand out for their consistent activation to many things that humans enjoy. Caudate activation is so consistent that under the right circumstances, it can predict our preferences for food, music and even beauty.

In dogs, we found that activity in the caudate increased in response to hand signals indicating food. The caudate also activated to the smells of familiar humans. And in preliminary tests, it activated to the return of an owner who had momentarily stepped out of view. Do these findings prove that dogs love us? Not quite. But many of the same things that activate the human caudate, which are associated with positive emotions, also activate the dog caudate. Neuroscientists call this a functional homology, and it may be an indication of canine emotions.

The ability to experience positive emotions, like love and attachment, would mean that dogs have a level of sentience comparable to that of a human child. And this ability suggests a rethinking of how we treat dogs.

DOGS have long been considered property. Though the Animal Welfare Act of 1966 and state laws raised the bar for the treatment of animals, they solidified the view that animals are things — objects that can be disposed of as long as reasonable care is taken to minimize their suffering.

But now, by using the M.R.I. to push away the limitations of behaviorism, we can no longer hide from the evidence. Dogs, and probably many other animals (especially our closest primate relatives), seem to have emotions just like us. And this means we must reconsider their treatment as property.

One alternative is a sort of limited personhood for animals that show neurobiological evidence of positive emotions. Many rescue groups already use the label of “guardian” to describe human caregivers, binding the human to his ward with an implicit responsibility to care for her. Failure to act as a good guardian runs the risk of having the dog placed elsewhere. But there are no laws that cover animals as wards, so the patchwork of rescue groups that operate under a guardianship model have little legal foundation to protect the animals’ interest.

If we went a step further and granted dogs rights of personhood, they would be afforded additional protection against exploitation. Puppy mills, laboratory dogs and dog racing would be banned for violating the basic right of self-determination of a person.

I suspect that society is many years away from considering dogs as persons. However, recent rulings by the Supreme Court have included neuroscientific findings that open the door to such a possibility. In two cases, the court ruled that juvenile offenders could not be sentenced to life imprisonment without the possibility of parole. As part of the rulings, the court cited brain-imaging evidence that the human brain was not mature in adolescence. Although this case has nothing to do with dog sentience, the justices opened the door for neuroscience in the courtroom.

Perhaps someday we may see a case arguing for a dog’s rights based on brain-imaging findings.

6 thoughts on “Dogs Are People, Too”