In early June, when Susan Andre went for a leisure horse back ride in Arizona’s Usery Mountain Recreation Area, she never expected to find two shepherd-mix dogs along the path. The dogs were happy to meet Andre and ran up to her, tails wagging. What Andre didn’t know was the friendly dogs had been abandoned there.

A week later when she crossed paths with the dogs again, Andre saw a different picture. This time the dogs were scared, hungry and evasive. This made her realize someone had left the dogs to their own fate in the hot desert. 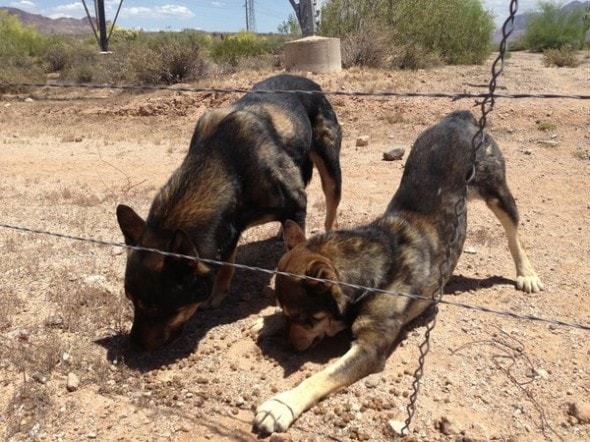 Andre owns three dogs of her own and it was impossible for her to take the discarded pets back home with her. She made it her mission to find help for these dogs.

For the next three weeks she drove up to the desert every day to check on the animals. The canines had made a green palo verde tree their refuge and Andre made sure the dogs received plenty of food, water and ice during her daily visits.

Finding help for the dogs proved difficult. No one was interested in rescuing two stray dogs living on federal land.

“I’m scared to take them to someplace where they’re going to be put down,” Andre told 3TV News. “They just need a good home.”

Sheriff Joe Arpaio saw the news report and sent Maricopa County deputies to rescue the animals. The dogs were immediately taken to Palm Glen Animal Clinic where Dr. Berney Mangone found them to be in good health.

While at the vet, it was discovered that one of the pets had a microchip. The dog’s name is Junior and the chip was registered to 36-year-old Jamie Rae Seehan.

The Sheriff contacted Seehan and she admitted to abandoning her pets in the desert back in March because she was moving to Minnesota and didn’t know what to do with her dogs.

Seehan was arrested and charged with two counts of animal cruelty.

“It is cruel and inhumane to leave your animals outside to fend for themselves without food or water,” said Arpaio. “This person will be held responsible for this cruelty to these nice animals.”

The shepherd-mix dogs are being cared for by inmates at the sheriff’s animal M.A.S.H unit. Once the animal cruelty case goes to trial and Seehan is convicted, the dogs will be placed for adoption.