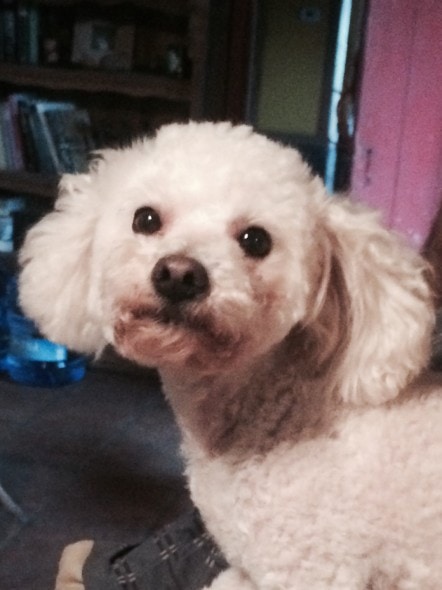 Tracy Frank, of SARA Sanctuary in Texas, was headed back from picking up Frieda, a very sweet and energetic black lab who had just come out of eye surgery at the Animal Eye Hospital in San Antonio, Texas. Tracy and the SARA staff love Dr. Charles Bonney and his staff!

As Tracy was driving, she saw what appeared to be a white plastic bag about 1/8 of a mile in the distance, blowing across the busy Loop 1604. Traffic was particularly heavy that Thursday for 3pm. Loop 1604 is often called the “Death Loop” because of its swift moving traffic and the large number of fatalities that occur on that stretch of road each year.

Soon, though, the plastic bag began to take shape and morphed into a small white dog! Tracy watched in horror as this tiny white dog managed to run across 6 lanes of high speeding vehicles, stopping at a concrete embankment that must have been about 5 feet high on her side of the road.

Tracy pulled over and jumped out of her truck, trying to approach the little dog, but she started running again and dove 12 feet to the feeder road below, crossing two more lanes of traffic and heading towards an apartment complex.

Tracy jumped back into her truck to find Frieda now sitting in the front seat. They sped south, looking for an exit because they were forced to head in the opposite direction of the dog and then exit and turn around. Tracy drove for what seemed like forever, until she could get off 1604 and make a U-turn back to the place she had last seen the dog. Traffic was stopped by a police officer on a motorcycle for a funeral procession, though! It seemed to take forever!

Tracy finally got back to the gated apartment complex, ran in and explained to the manager what was happening and asked if she could look around. She was nice and gave Tracy the gate code. Tracy drove back, not sure where to go or turn. Someone called and Tracy explained what was happening and that she would probably, sadly, never see the dog again.

Suddenly, out of the corner of Tracy’s eye, there she was, sitting next to a wrought iron fence, just a couple of feet away, looking at Tracy! Tracy slowly approached her. The little dog was panting and scared. Every time Tracy got a couple of inches closer, she would back off. Tracy continued her approach, talking to her the whole time.

Finally, after ten minutes of soothing words and pleading, she relented and allowed Tracy to pick her up. She didn’t weigh ten pounds, just skin and bones under a dirty white curly coat, brown stains under her brown, button eyes. She was still scared, but Tracy was relieved as she put her inside the pick-up and she sat right next to Frieda, who didn’t seem fazed one way or the other.

Cotton Ball will now be safe and hopes to soon find a home of her own. She is a Malt-Poo, a designer mix, about four years old.

SARA (Society for Animal Rescue and Adoption) Sanctuary is a non-profit, 501(c)3, no-kill facility providing rehabilitation to abused or abandoned domestic and factory farm animals on a 120 acre preserve serving the Austin, San Antonio and surrounding Texas communities. They seek to be an example, illustrating the value of companion animals and the irresponsibility of allowing an unending cycle of reproduction, neglect and abuse. They have a true no-kill policy, allowing the animals to live out their natural lives regardless of age, temperament or health.