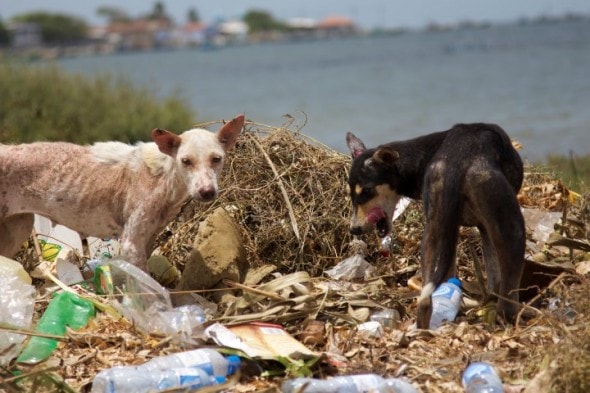 Samantha (Sam) and Mark Green, both from the UK, have been living in Sri Lanka on and off for about eight years, working to fight dog overpopulation in Sri Lanka since 2006, when they began the Dogstar Foundation.

Sam originally arrived in Sri Lanka in 2006 to volunteer as an English teacher at a Buddhist temple. However, her life soon changed after a Buddhist monk saw her giving flea treatments to puppies and approached her to help a very sick dog named Mango. After successfully saving Mango’s life, the monk suggested to Sam that this was the reason she had come to Sri Lanka and she began formulating the plan that would later become Dogstar Foundation.

Just last year, Sam and Mark made the decision to move to Sri Lanka completely and remain there on a full-time basis. They gave everything they owned away, including their car, and then packed their entire lives into nine bags and embarked on this new path that life had taken them.

Thankfully, they were able to give a bit of their time to discuss their most recent project, to sterilize at least 3,500 roaming dogs in the Jaffna District and vaccinate them against rabies, as well as some of their other work.

What is the background to the challenges in Sri Lanka and in Jaffna?  Many communities are emerging from conflict, right?

“The war ended in 2009…It was a long conflict period and so practically all of the country’s money was put into fighting the war and so not much money could be put into things like animal overpopulation or even roads…These were just not the highest priority. Also, many people don’t value veterinary service…When students  fail to get a place at medical school they are offered veterinary science and seen by many as failed doctors which is tragic.

Jaffna was definitely in the midst of the conflict too…They were right in the middle of heavy fighting and were cut off from the rest of the country, so understandably there was no veterinary care. As a result, there are thousands of dogs there. Some are also still traumatized from the war and tend to keep away from people.

The dog population survey conducted produced a calculation of 4,000 roaming dogs in Jaffna.  This doesn’t include people’s pets other than some that could be pet dogs that have a home but are just let loose and not cared for…But 4,000 that can breed twice a year and are in bad condition…So it’s probably one of the most ambitious initiatives we have ever done. We plan to sterilize 3,500 dogs, bringing the population down considerably.

Street dogs are a part of Sri Lankan culture, so we won’t completely remove them. But when there are fewer, then people can tolerate them more and are more likely to feed them and there is less rabies and fighting.”

How many people are in that region, just to put the 4,000 dogs into perspective?

“The city has a population of just under 90,000. However, you have to keep in mind that number we came up with only includes roaming dogs and not those being cared for. You stand around and there are dogs everywhere!” 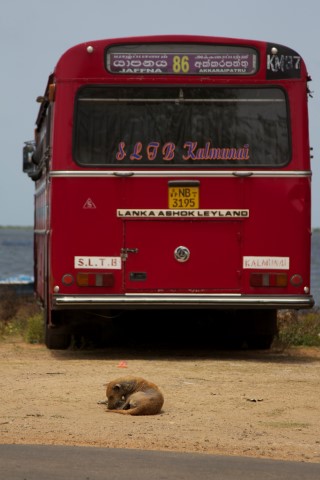 How did Dogstar get teamed up with the other organizations involved -Tsunami-Animal People Alliance (TAPA), Fondation Brigitte Bardot and Embark?

“We worked with TAPA for the last 4 years and we do a lot together… Embark is a social responsibility organization based in the capitol, located at a store called Odel. They have human and animal projects and sell t-shirts and things to raise funds. Fondation Brigitte Bardot is one of Embark’s funders and is funding the Jaffna project, via Embark…

We all teamed up on the Jaffna initiative after the local council of Jaffna reached out and asked us to intervene because of the massive problem. We sent a few people there to conduct the dog counts and it was one of the worst areas we have seen.

It takes a whole day to even get up there because the road system is really bad. We have a mobile bus clinic and that has to be driven up there, as well as a team of 14 veterinary staff, which includes four vets, four vet technicians, a bus driver, dog catchers and other veterinary staff…The team is a total of 25-30 people and is a combined team that includes TAPA staff.”

What has the community response been? Mostly positive or negative? Do they understand the importance of what you are doing?

“We have been amazed at how concerned the community has been for the dogs and how supportive they are in this area. Because they have been cut off for so long, we expected them to be less aware of animal welfare and human dog population, but their awareness of the work’s importance has been amazing! It’s one of the best responses we have ever had.  It’s just been really, really positive…

The whole outlook is going to change there because, as we get more funding, we can expand to other areas in Jaffna and do new clinics…It’s very important that we sterilize at least 75% in each area, though we aim for 80-90% which naturally brings the population down humanely. If we removed all the dogs in one area suddenly, the dogs from the neighboring area will move in, breed and replace those moved. That’s why dog culling never works …It’s also very important to take them back from where they came from for this reason and to stop the spread of rabies as they get vaccinated…

We then leave a Velcro collar on them that will eventually fall off so that people will know that they have been sterilized and we cut the tip of their ear so they are not brought back in again in the future.

People in the community will often bring in street dogs from their village or the market, even though they don’t own them, just because they understand the importance of this.

Our teams work to international standards for field surgery … Also, pooling our resources and the joint efforts with TAPA is really beneficial…You can work together as long as you leave your egos at the door and this has really, really positive outcomes…None of us could have individually done this, so the 4 organization partnership helps. We are each committing to 1/3 of the cost, with Fondation Brigitte Bardot helping fund Embark’s contribution.” 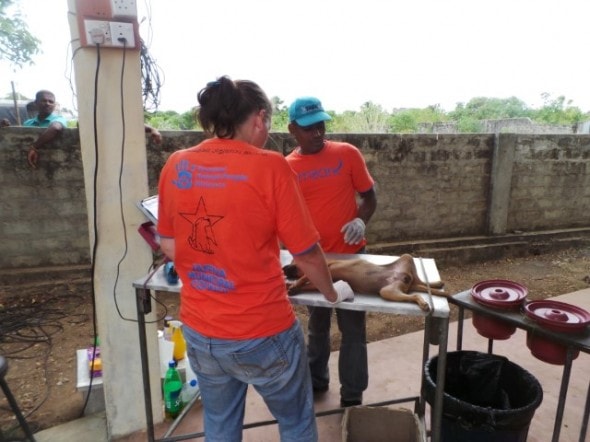 So, you advocate Catch, Neuter, Vaccinate and Return (CNVR). Why do you think this is important, especially in a situation like in Sri Lanka?

“Beyond what we just mentioned, it’s also very cost effective. At about $20 per dog, it is a more sustainable approach than dog pounds or culling and provides a permanent humane solution that has benefits for animal and human populations

Sometimes people in the West have a problem with it because of the image of the “evil dog catcher”…However, dog catching with the net is the most friendly, humane thing. The dog runs into the net and we are able to hold the dog safely so that both the dog and people are protected. They are examined inside the net and then we take them out and examine them again and if we feel they are okay for surgery, they go in.

If we see a dog that is old or a puppy or a mother dog clearly still feeding puppies, we won’t bring them in. After they go through surgery, they are able to recover and then, once fully recovered, they are brought back to where they came from. Some actually enjoyed their day and are tentative about returning.

The surgery is different than what is done in the UK. It’s called a keyhole surgery so there is a tiny incision and the all stitches are on the inside and dissolvable so the dog can’t pull them out…It’s designed for this kind of situation and works really, really well with our dogs.

Everything used for surgery is also sterilized for each individual dog and the surgery is conducted in a very professional way just the same as you would expect at our local vet clinic.”

And have you seen a significant change since this initiative began? In what ways?

“It’s too soon to see the results yet but in other places that we have done this, elsewhere in the country, you see a huge reduction in dogs in the streets and a huge improvement in the existing dogs’ conditions…We have jointly (TAPA and Dogstar) sterilized over 50,000 dogs since the end of the Tsunami in 2004.”

So, the Tsunami also affected the dog overpopulation problem?

“Yes, the dogs that lived by the beaches would get fed by tourists and people at the beach and then all the sudden that food source disappeared. Additionally, many owned dogs became orphans and street dogs…There were a lot more animals that didn’t have owners after that.”

Are there any other things you would like to mention?

“Jaffna is just one element of the work we do here in Sri Lanka.  We are also, in the process of doing a dog count in the Negombo area, which is close to the airport.  The count will eventually result in us doing a sterilization project there, as well as running an education program, which will include a bite prevention program to help stop children from being bitten.  At the moment this is at the conception stage.

So, we are running several big street projects in the next few years-Jaffna, Negombo and our original in Kegalle, where we have already seen the successful sterilization program and left a small team behind to continue to sterilize dogs. We try to always leave a team behind so that we don’t lose the benefit of the project that we have been doing for the past few years.

All of this can be a bit scary considering we are really quite a small charity…Mark and I are the management team and we are unpaid and we have a combination of paid staff and volunteers. We do the fundraising, project planning, and working on the ground with the teams and basically make the money go as far as possible.”

To see more about the Jaffna project or to contribute, see: https://www.justgiving.com/project-jaffna/