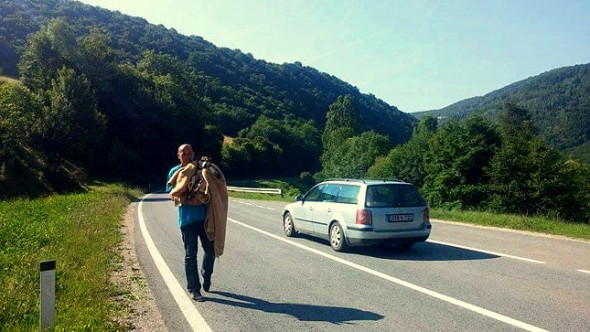 A man and woman were driving along a very busy Bosnian highway when they saw bloated female dog dangerously running in between cars.  She was confused and terrified, but trusted this couple enough to let them feed her.  Then, desperate for help, she led them to her puppies…. You’ll have to read on to find out what happened next!

Harmony Fund posted this story, which was originally written by Edina Pasic:

In the middle of the busy highway we saw a female dog running totally confused between cars and trucks. The cars were passing very fast, so I screamed. My teammate Caki stopped the car and tried to get over to her slowly. She was so scared that she started to run away from him. Luckily he managed to chase her over to a widening, so I called on her while Caki went back to get the car. We had left it in the middle of the highway.

After a while, I didn’t even know what I was talking to her about anymore. I begged her to stay there with me. She looked at me obediently. Her eyes were sad and looked bad. She was full of scars. I cried with her. Her breasts were hanging to the floor. 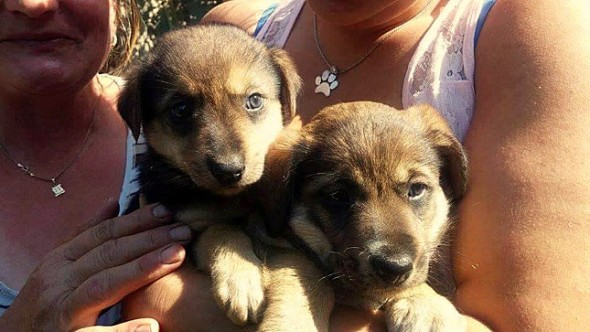 Luckily we had some food in the car. When we gave her some food she ate very fast. It was hard to believe, she ate big cans of food. She was so puffed that we didn’t know if she was with puppies or if she had already had them. We also gave her some doggy crackers. She ate two, took the third in her mouth and started to walk away from us, back towards the highway. It was warm. The cracker (she was planning to give to her puppies) melted in her mouth. She swallowed it and continued going towards the road.

We realized that she had puppies waiting for her, since she was going back. I followed her on foot and Caki with the car. She didn’t run from me anymore. We walked on the edge of the highway together. My heart stopped every time a big truck or a car rushed by. I`ll never forget that. Even now, while I`m writing this, I start to cry.

We walked for about 1.5 kilometers. Just imagine how far she has walked to find food. Imagine how hungry she must have been. She kept turning around to see if I was still following her, like she was taking me to see her babies. We came to a hill and she started going up. There was only one house there, only one. We went to the house and she led me to a shed. I heard the puppies cry for their mother. 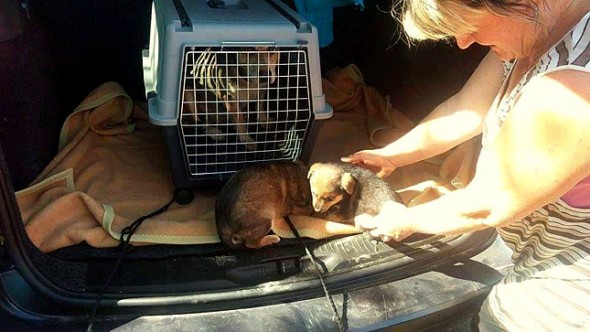 I decided to knock on the front door of the house and ask them about this little family. An older man opened the door and immediately got mad when I asked about them. I was already upset about this poor dog, so this was the last thing I needed. He told me he was planning to take them somewhere far away when his son came over with the car. He had already planned this for a very long time, but sadly for him and luckily for them, he didn’t have a car. I asked him to help me gather them up and I would take them with me. He was shocked. I asked him how many babies there were. He told me that she had originally given birth to five puppies, but three had died and only two survived. Poor Mimosa was wagging her tail when the owner of the house came towards her. Even though he didn’t love her, she still loved him.

His wife, being more humane then him, started to cry and told me she had been feeding them in secret from her husband. These poor lives. We first placed the puppies in a box, then the mother. She didn’t protest, she trusted me. I started to cry again. Thinking back, I think it was more from the shock.

The mommy gave me kisses the whole way. She’s now in a pension [sanctuary?] with her son and daughter, waiting for their forever homes. She’s great with people. When she’s outside with her babies at the pension, she growls at the other dogs that get too close to her babies, looking out for them. She is very kind. We are now struggling to keep them safe here until they get new homes.

Edina and Caki rescue hundreds of dogs every year, and urgently need help caring for all of them – this case in particular.  If you would like to donate and help save the lives of countless suffering street dogs, please CLICK HERE. 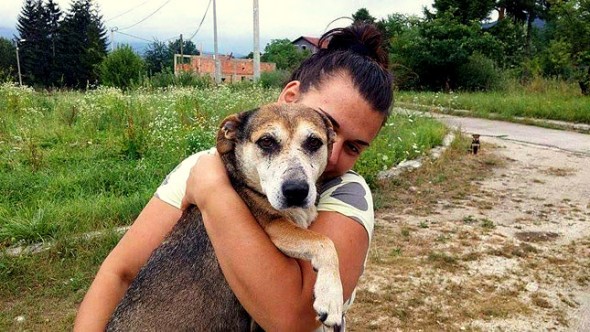