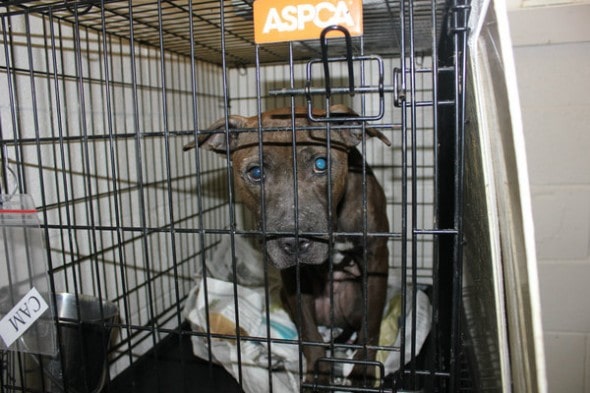 35-year-old Desmond B. White and 37-year-old Maurice Baum were arrested on federal drug charges. After being arrested, authorities obtained search warrants. They quickly found evidence that led them to believe White and Baum were involved in dog fighting.  They soon were led to several properties where dogs were being kept. Initially authorities seized 45 dogs from four different properties. Then additional properties were discovered, and 35 other dogs were seized on February 12th and 13th.

“I’ve been in law enforcement 28 years now and I’ve never seen anything [like this],” said Sheriff Randy Cartwright. Also seized from the properties were treadmills, leather dog restraints, dog cages, medication, heat lamps and a how-to book on training pit bulls to fight. “It’s a tough situation,” said Cartwright. “A lot of them have broken bones, hips messed up or skulls cracked, but they save them because they are good for breeding.

An emergency shelter has been set up for the seized dogs. The shelter is in need of volunteers and monetary donations. Anyone interested in helping out should contact the Pasquotank County Sheriff’s Office. PetSmart Charities has donated food and supplies already. Authorities are also offering a reward of up to $5,000 for information leading to the arrest and conviction, of those participating in illegal animal fighting. No charges have been filed yet in the dog fighting investigation.