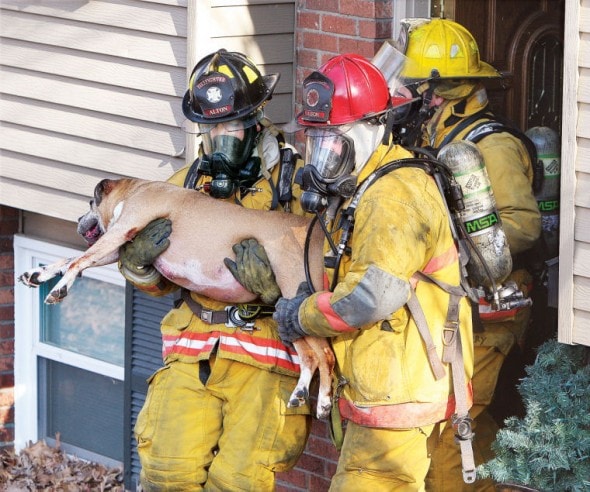 When fire broke out in the family home, Lola, an eighty pound boxer, hid between a bed and a wall.  It wasn’t until the fire was out that emergency crews were able to find her and get her out of the house, suffering from severe smoke inhalation.  However rescuers were able to immediately give her oxygen and revive her before transporting her to hospital.

“The dog was breathing slow and shallow when she was brought out,” Fire Chief Bernie Sebold said. “We were concerned, so we contacted Formea Animal Hospital to see if we could bring her in.”  Hours later, Lola was reported to be recovering well, much to the relief of her distraught owner Jodie Elliott.  Elliott had tried to coax the dog out of the house, but it was too dangerous to enter so she waited, desperately hoping that Lola would survive.

The Alton Fire Department started using emergency kits for pets several years ago and credit them with saving the lives of many pets.  Elliott had taken her daughter to school and come to home to find the house on fire, with only the beloved boxer inside.  Elliott’s younger daughter and her other dog, a bulldog named Willie, were with her.

The fire seems to have started in the kitchen where empty pizza boxes were set on top of the stove.  It is unclear how the stove got turned on, but there is speculation that Lola may have been trying to get into the pizza boxes and inadvertently turned the knobs on the stovetop.   Let that be a warning to pet owners, and people with small children, never to leave anything flammable on a stove top even if you think it is not going to be turned on.  Fortunately, everyone is going to be okay, and the family is together, which means a happy ending for all.